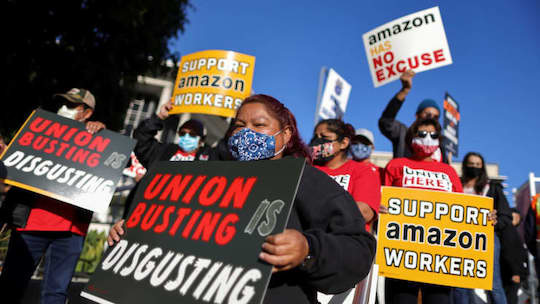 Amazon Shareholder Unite for two two-way dialogues. Last summer I warned that chat rooms are the key missing ingredient at virtual shareholder meetings. Chat rooms before and after meetings would allow shareholders to interact informally with each other and with corporate representatives, as they do at in-person meetings. Virtual chat rooms would in no way overcome non-democratic obstacles, such as “Formula Swapping” at Amazon. However, chat rooms would facilitate the ability of shareholders to at least communicate in many more two-way dialogues.

Why should the company pay for a virtual room for shareholders to communicate with each other? Many view annual meetings as company meetings, not shareholder meetings. Shareholders, these meetings are you, your ability to communicate, your ability to form communities of interest and influence. Since in-person meetings are missing, we have to take matters into our own hands. Last year, we did it at Tesla.  This year it starts with Amazon.

Amazon Shareholders Unite: How to Join the Discussion

Join us for a webinar on several shareholder proposals on the 2021 Amazon.com proxy. Proponents will share the rationale for proposals on at least the following:

You must register in advance for this webinar that will start at 10 AM Pacific on May 6, 2021.

A Clubhouse meeting will start 15 minutes earlier at 9:45 AM but we’ll mute at 10 and pick up after the Zoom conference. Again, space will be limited. If you want to attend email me well in advance.