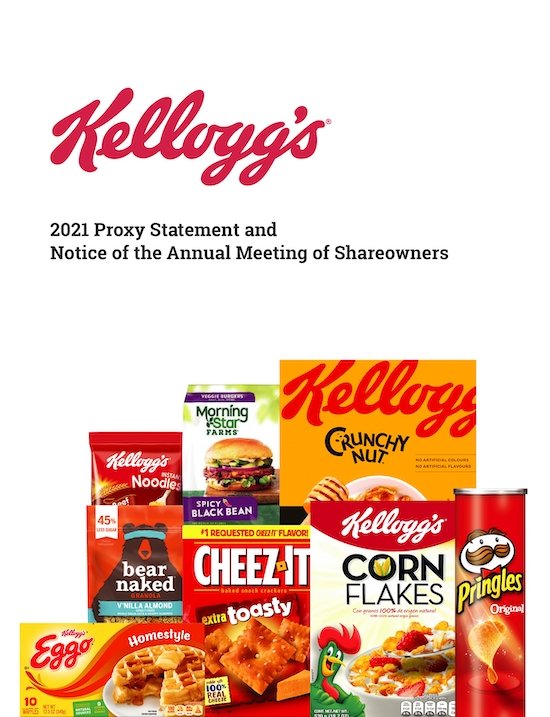 Kellogg 2021 annual meeting is April 30, 10 Pacific Time. To attend, vote, and submit questions during the Annual Meeting visit www.virtualshareholdermeeting.com/K2021 and enter the 16-digit control number. I recommend voting in advance. To enhance long-term value. Vote AGAINST Zack Gund and Don Knauss, Pay, and Auditor. Vote FOR Reduce Supermajority Requirements and Shareholder Right to Call Special Meetings. WARNING: I may change my votes after I see how disclosing funds voted. Check back two days before the meeting.

Kellogg Company, together with its subsidiaries, manufactures and markets ready-to-eat cereal and convenience foods.  Most shareholders do not vote.  Reading through 70+ pages of the proxy takes time but your vote could be crucial. Below, how I voted and why.

Kellogg Company’s ISS Governance QualityScore as of April 1, 2021 is 7. The pillar scores are Audit: 3; Board: 6; Shareholder Rights: 9; Compensation: 4.

Egan-Jones Proxy Services recommends against Zack Gund and Don Knauss.  Both are Compensation Committee members responsible for poor pay recommendation. Additionally, Knauss has served for longer than 10 years, so should not be considered independent.

Kellogg’s Summary Compensation Table shows the highest paid named executive officer (NEO) was Chairman and CEO Steve Cahillane at $11.7M. I’m using Yahoo! Finance to determine the market cap ($22B). Large-caps are $10B, mid-cap as $2-10B, and small-cap are less than $2B. Kellogg is a large-cap company.

Egan-Jones Proxy Services found the Company’s compensation policies and procedures are “not effective or strongly aligned with the long-term interest of its shareholders.” Agreed.

I have no reason to believe the auditor engaged in poor accounting practices or has a conflict of interest. Egan-Jones recommends voting against the auditor if they served for seven years. Independence becomes compromised by that time. PricewaterhouseCoopers, LLP  served more than seven years. No other issues appear significant

My proposal to adopt a simple majority standard won 53% of the vote last year. Following that vote, this year the Board is asking shareholders to approve amendments to the articles of incorporation and bylaws to accomplish that goal. Egan-Jones believes the move will “strengthen the Company’s corporate governance practice.”

Sidebar: In 2019 my proposal to declassify the board won 62% of the vote. In 2020 the Board asked shareholders to approve amendments to accomplish that goal and we did. Hopefully, this year we will pass this measure to reduce supermajority standards but it will take a large turnout.

This good corporate governance proposal comes from me, James McRitchie, so of course I voted FOR. Egan-Jones also recommends Against, believing the 15% level requested is too low. The Board takes no position. Having the right to call a special meeting allows shareholders to hold the board accountable. The right is associated with a higher shareholder value.

In looking up a few funds in our Shareowner Action Handbook, I see Calvert, NYC Pensions, and Norges voted For all items.

Shareowner proposals submitted for inclusion in our proxy statement for the 2022 Annual Meeting of Shareowners must be received by us no later than November 10, 2021.