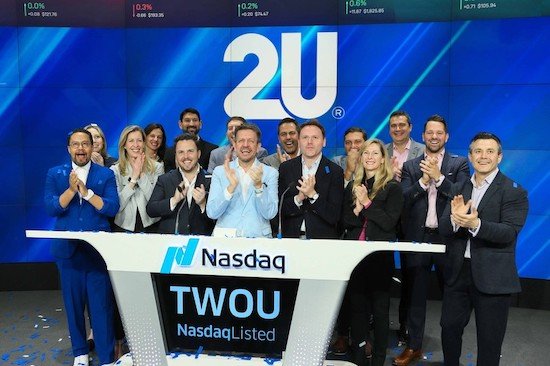 2U 2021 annual meeting is June 3, noon Pacific Time. To attend, vote, and submit questions during the Annual Meeting visit here. You need your control number. I recommend voting in advance. To enhance long-term value. Vote AGAINST all directors, Pay, Auditor; FOR Elect All Directors Annually.

2U, Inc. operates as an education technology company in the United States, Hong Kong, South Africa, and the United Kingdom. The company operates in two segments, Degree Program and Alternative Credential. The Degree Program segment provides the technology and services to nonprofit colleges and universities to enable the online delivery of degree programs.  Most shareholders do not vote.  Reading through 70 pages of the proxy takes time but your vote could be crucial. Below, how I voted and why.

I voted with none of the Board’s recommendations. View Proxy Statement via SEC’s EDGAR system (look for DEF 14A).

The Board failed to act on a 2018 vote by shareholders to declassify the board. Introduced by CalPERS, it won 87% of the vote. Defying the will of shareholders on that level should not be tolerated. Directors are elected by shareholders and should be cognizant that we will hold them accountable. I will also note that last year directors were reelected with votes ranging from 61% to 68%. That is incredibly low for a board running without opposition.

2U Summary Compensation Table shows the highest paid named executive officer (NEO) was CEO Christopher J. Paucek at $6.4 M. I’m using Yahoo! Finance to determine market cap ($2.7 B) and I define large-cap as $10B, mid-cap as $2-10B, and small-cap as less than $2B. Biogen is certainly a mid-cap company, but barely.

Given the lack of pay alignment with shareholder returns and my concern for growing wealth disparity, I voted Against.

I have no reason to believe the auditor engaged in poor accounting practices or has a conflict of interest. Egan-Jones recommends voting against the auditor if they served for seven years. Independence becomes compromised by that time. KPMG LLP served ten years. No other issues appear significant.

2U takes no position. This proposal from me (James McRitchie), so, of course, I voted For it. Egan-Jones generally notes: “staggered terms for directors increase the difficulty for shareholders of making fundamental changes to the composition and behavior of a board. We prefer that the entire board of a company be elected annually to provide appropriate responsiveness to shareholders.”

Almost 90% of S&P 500 and Fortune 500 companies have declassified boards. According to Equilar; “A classified board creates concern among shareholders because poorly performing directors may benefit from an electoral reprieve. Moreover, a fraternal atmosphere may form from a staggered board that favors the interests of management above those of shareholders. Since directors in a declassified board are elected and evaluated each year, declassification promotes responsiveness to shareholder demands and pressures directors to perform to retain their seat. Notably, proxy advisory firms ISS and Glass Lewis both support declassified structures.”

In looking up a few funds in our Shareowner Action Handbook, NYC Pensions voted Against/Withhold all directors. They do not provide a reason. I suspect it is for failing to act on a 2018 vote by shareholders to declassify the board. Introduced by CalPERS, it won 87% of the vote. They voted For all other items.

I wish I could report how ARK Investment Management voted, since they own 18% of 2U and I am also an investor in ARK. Unfortunately, I have contacted them several times with no reply and I have been unable to find their proxy voting policies online.

Norges voted For all items.

To be included in the 2022 proxy shareholder proposal must be received by no later than the close of business on December 20, 2021.