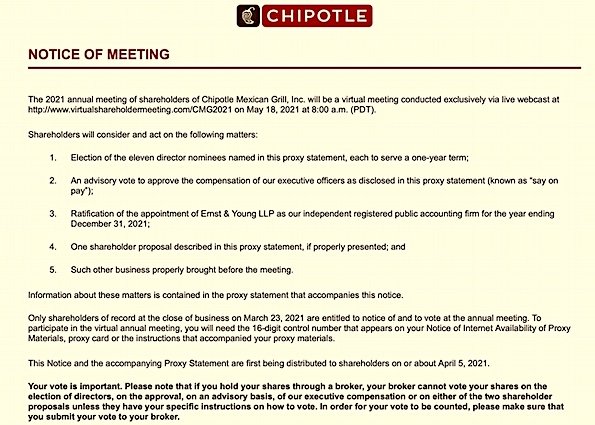 Chipotle 2021 annual meeting is May 18, 8AM Pacific Time. To attend, vote, and submit questions during the Annual Meeting visit here. From there you will need the control number you got from ProxyVote or elsewhere. Of course, I recommend voting in advance. To enhance long-term value. Vote AGAINST Engles, Fili-Krushel, Flanzraich, Gutierrez, Namvar, Niccol, Pay, and  Auditor. Vote FOR Written Consent.

Chipotle Mexican Grill, Inc., owns and operates 2,724 Chipotle restaurants in the United States, 40 international, and 4 non-Chipotle restaurants. The company was founded in 1993 and is headquartered in Newport Beach, California. Most shareholders do not vote.  Reading through 90 pages of the proxy takes time but your vote could be crucial. Below, how I voted and why.

From the Yahoo Finance profile page:  Chipotle Mexican Grill, Inc.’s ISS Governance QualityScore as of April 30, 2021, is 2. The pillar scores are Audit: 2; Board: 2; Shareholder Rights: 4; Compensation: 5.

Chipotle’s Summary Compensation Table shows the highest paid named executive officer (NEO) was CEO Brian Niccol at $14.8M. I’m using Yahoo! Finance to determine market cap ($40B) and I define large-cap as $10B, mid-cap as $2-10B, and small-cap as less than $2B. Chipotle is certainly a large-cap company.

According to MyLogIQ, the median CEO compensation at large-cap corporations was $13M in 2020. CEO Brian Niccol is at $14.8M is above that amount.  Chipotle shares have outperformed large-caps over the most recent one-, two-, and five-year time periods. The ratio of the annual total compensation of the CEO to the median of the annual total compensation of all employees was 1,129 to 1. That is outrageous, especially given front-line Covid risk in 2020. See also A squandered chance to reform executive pay.

Egan-Jones Proxy Services found the Company’s compensation policies and procedures are not effective or aligned with the long-term interest of its shareholders. They recommend voting Against. Given my concern for the growing wealth disparity, I agreed.

I have no reason to believe the auditor engaged in poor accounting practices or has a conflict of interest. Egan-Jones recommends voting against the auditor if they served for seven years. Independence becomes compromised by that time. Ernst & Young has been the auditor for more than seven years, in fact, 24 years. No other issues appear significant.

Many boards and investors assume a false equivalency between rights of written consent and special meetings. However, any shareholder, regardless of how many (or few) shares she owns, can seek to solicit written consents on a proposal.

Proxy Insight reported the votes of Trillium when I last checked. They voted For Carey, Engles, Gutierrez, and Written Consent; Against all other items.

In looking up a few funds in our Shareowner Action Handbook, I see Calvert voted For all items except Pay and the Auditor. CBIS voted the same. NYC Pensions voted Against Fili-Krushel, Flanzraich, Namvar, and Pay; For all other items. Norges voted against Niccol and Pay; For all other items. It is nice to have the support of all pre-disclosing funds for my proposal, #4 Shareholder Right to Act by Written Consent.