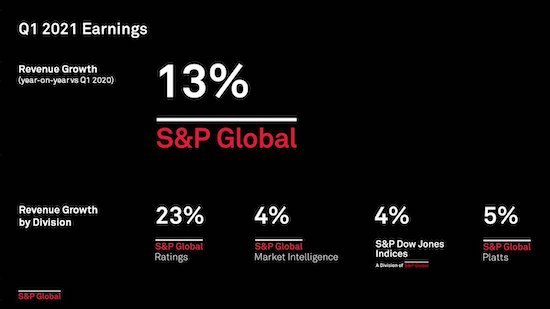 S&P Global 2021 annual meeting is May 5, 8AM Pacific Time. To attend, vote, and submit questions during the Annual Meeting visit www.meetingcenter.io/283714745. You will need your control number. Of course, I recommend voting in advance. To enhance long-term value. Vote AGAINST , the Auditor, and Pay. Vote FOR . With my broker (TD Ameritrade), the only place I can find that control number is in a “vote now!” email I received long ago. If you deleted a similar email, you can still attend as a guest but you will not be able to vote or ask questions. Save those emails! To enhance shareholder value, vote AGAINST Green, Hill, Leroux, Livingston, Rust, Schmoke, Thornburgh, Pay, and Auditor: FOR Transition to Public Benefit Company.

S&P Global Inc., together with its subsidiaries, provides ratings, benchmarks, analytics, and data to the capital and commodity markets worldwide.  Most shareholders do not vote.  Reading through 130+ pages of the proxy takes time but your vote could be crucial. Below, how I voted and why.

I voted with the Board’s recommendations xx% of the time. View Proxy Statement via SEC’s EDGAR system (look for DEF 14A).

From the Yahoo Finance profile page: S&P Global Inc.’s ISS Governance QualityScore as of April 1, 2021 is 3. The pillar scores are Audit: 9; Board: 2; Shareholder Rights: 4; Compensation: 4.

Egan-Jones Proxy Services recommends against 1C. William D. Green, 1J. Edward B. Rust, Jr., 1L. and Richard E. Thornburgh.  Directors who served for longer than 10 years are not considered independent. Since I voted against Pay, I voted against members of the compensation committee, which include the following additional directors: Leroux, Schmoke, Hill, and Livingston.

S&P Global’s Summary Compensation Table shows the highest paid named executive officer (NEO) was CEO Douglas L. Peterson at $15M. I’m using Yahoo! Finance to determine market cap ($94B) and I define large-cap as $10B, mid-cap as $2-10B, and small-cap as less than $2B. S&P Global is certainly a large-cap company.

Egan-Jones Proxy Services found compensation policies centered on pay-for-performance, strongly aligned with the long-term interest of its shareholders, and necessary to attract and retain experienced, highly qualified executives. They recommend voting For.

I am concerned with growing wealth disparity, pay above the median for peers, high pay ratio, and restricted shares and stock options that vested over less than five years.

I have no reason to believe the auditor engaged in poor accounting practices or has a conflict of interest. Egan-Jones recommends voting against the auditor if they served for seven years. Independence becomes compromised by that time. Ernst & Young, LLP served more than seven years. No other issues appear significant

Egan-Jones recommends For. Norges and Trillium voted For. I am hoping they are better at evaluating such plans than I am.

This proposal comes from me, James McRitchie, written by experts at The Shareholder Commons, so of course, I voted FOR. Egan-Jones recommends Against, parroting Board arguments.

The purpose of the Proposal is to better address the inevitable tension between shareholder interests and stakeholder concerns. The Proposal’s suggested resolution—conversion to a benefit corporation—is celebrated by Leo Strine, the former Chief Justice of Delaware. Chief Justice Strine argues conversion to benefit corporation status resolves the contradiction between company-first shareholder primacy and the need to account for the full impact of business operations:

So how to resolve this legal impasse? A recent innovation offers a sensible answer. … [The benefit corporation] puts legal force behind the idea that a business should have a positive purpose, commit to do no harm, seek sustainable wealth creation, and treat all its stakeholders with equal respect.

In its opposition statement, S&P Global demonstrates it has not considered the gap between what it is doing to address stakeholder interests and what it could do as a PBC.

Most S&P Global shareholders are diversified investors who depend on an economy that succeeds for everyone over the long term. As a PBC, S&P Global could better consider the long-term risks to multiple stakeholders and the overall economy, as well as to S&P Global. S&P Global would be incentivized to protect you as a diversified shareholder by limiting activities that undermine healthy systems necessary for a successful economy. These social and environmental costs on the economy are not insignificant. At $2.2 trillion annually, they equal more than 2.5% of global GDP. While S&P Global may increase its isolated return to shareholders slightly by applying a company-first shareholder primacy model, its diversified shareholders will ultimately pay for the costs it externalizes.

Ironically, much S&P Global’s most quickly growing work involves rating environmental, social, and governance (“ESG”) rankings, benchmarks, and indices. Their products help companies and investors focus on the impacts that companies have on stakeholders and on environmental and social systems. However, S&P Global’s decisions about how to devise and market these products must be ultimately be based upon a narrow view of fiduciary duty based on internal financial return.

Converting to a PBC would facilitate the ability of S&P Global to assess the ESG risks based on likely impacts to the larger environment, society, and governance structures. That should give them an advantage over competitors, which remain limited because of fiduciary duties exclusive to their shareholders. In purchasing rating services, would you buy from a company that puts its own profits first or one that considers your interests?

As a PBC, S&P Global would have a clear advantage with regard to its customers. It would be like hiring a financial advisor who owes you a fiduciary duty, instead of one more concerned with how much they profit from you. (See also exempt solicitation.)

To have a proposal considered for inclusion in next year’s Proxy Statement, submit the proposal in writing so that we receive it by November 30, 2021. Proposals should be addressed to the Corporate Secretary, c/o Office of the General Counsel, S&P Global Inc., 55 Water Street, New York, New York 10041-0003. Another option is to send an e-mail to the Corporate Secretary at corporate.secretary@spglobal.com. Proposals must comply with applicable laws, including Rule 14a-8 of the Securities Exchange Act of 1934, to be included in next year’s Proxy Statement.