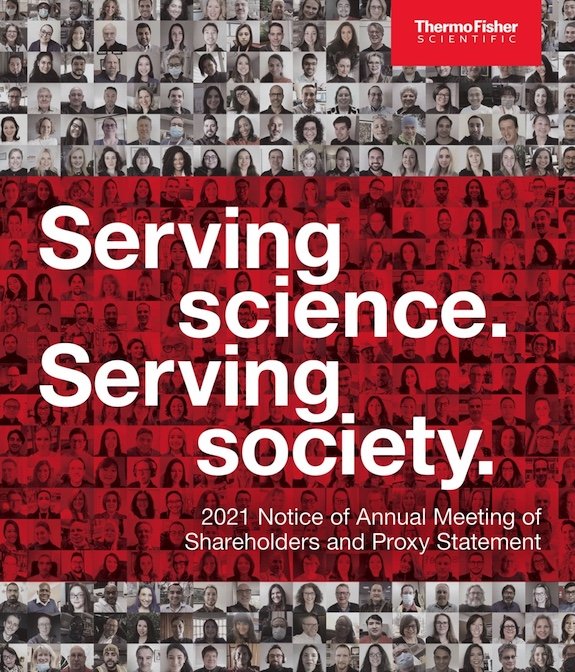 Thermo Fisher Scientific 2021 annual meeting is May 19, 10AM Pacific Time. To attend, vote, and submit questions during the Annual Meeting visit here. From there you will at least need the control number you got from ProxyVote or elsewhere. Of course, I recommend voting in advance. To enhance long-term value. Vote AGAINST Casper, Chai, Harris, Lynch, Manzi, Sørensen, Sperling, and Weisler, Auditor, and Pay. Vote FOR Shareholder Right to Call Special Meetings.

Thermo Fisher Scientific Inc. offers life sciences solutions, analytical instruments, specialty diagnostics, and laboratory products and services worldwide. The company, incorporated in 1956, is based in Waltham, Massachusetts. Most shareholders do not vote.  Reading through 85 pages of the proxy takes time but your vote could be crucial. Below, how I voted and why.

I voted with the Board’s recommendations 27% of the time. View Proxy Statement via SEC’s EDGAR system (look for DEF 14A).

From the Yahoo Finance profile page: Thermo Fisher Scientific Inc.’s ISS Governance QualityScore as of April 30, 2021, is 6. The pillar scores are Audit: 1; Board: 9; Shareholder Rights: 5; Compensation: 6.

Egan-Jones Proxy Services recommends against 1A) Marc N. Casper, 1F) Thomas J. Lynch, 1G) Jim P. Manzi, and 1K) Scott M. Sperling. E-J believes Casper warrants opposition for failing to address cybersecurity issues. The other directors who served for longer than 10 years are not independent. Additionally, since I voted against Executive Compensation I also voted against members of the Compensation Committee. Most have also served for more than 10 years, but Dion J. Weisler has not, so I am adding him to the list to vote Against. Additionally, the Board lacks diversity, so I voted against members of the Nominating and Corporate Governance that are not already included above: Nelson J. Chai, C. Martin Harris, and Lars R. Sørensen. I voted for R. Alexandra Keith, even though she serves on the nominating committee since the company needs more women on the Board, not fewer.

Thermo Fisher Scientific Summary Compensation Table shows the highest paid named executive officer (NEO) was CEO Marc N. Casper at $26.4 M. I’m using Yahoo! Finance to determine market cap ($184 B) and I define large-cap as $10B, mid-cap as $2-10B, and small-cap as less than $2B. Thermo is a large-cap company.

Egan-Jones Proxy Services found pay aligned with the long-term interest of its shareholders. They recommend voting For. Given my concern for the growing wealth disparity, I could not in good conscience vote that way.

I have no reason to believe the auditor engaged in poor accounting practices or has a conflict of interest. Egan-Jones recommends voting against the auditor if they served for seven years. Independence becomes compromised by that time. PricewaterhouseCoopers LLP (19 years). No other issues appear significant.

This good corporate governance proposal comes from Myra Young. Since I (James McRitchie) wrote it for my wife, of course, we voted FOR. Egan-Jones also recommends Against.

Proxy Insight reported only the votes of Trillium when I last checked. They voted Against Chai, Harris, Keith, Sorensen, and Pay; For all other items.

Shareholder proposals must be delivered to the Corporate Secretary at the principal executive office of the Company not less than 60, nor more than 75, days prior to the first anniversary of the date on which the Company mailed its proxy materials for the preceding year’s annual meeting of shareholders. Accordingly, for the 2022 Annual Meeting of Shareholders, reciept no earlier than January 23, 2022, and no later than February 7, 2022. Proposals received at any other time will not be voted on at the meeting.

The Age of Living Machines