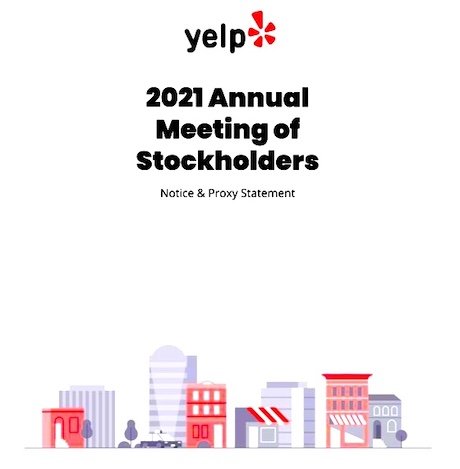 Yelp 2021 annual meeting is June 3, 9:30 AM Pacific Time. To attend, vote, and submit questions during the Annual Meeting visit here. To participate, you need the 16-digit control number provided on your proxy card or voting instruction form. Of course, I recommend voting in advance. To enhance long-term value. Vote AGAINST Hu, Wells, Auditor, and Pay. Vote FOR Transition to a Public Benefit Corporation.

Yelp Inc. operates a platform that connects consumers with local businesses in the United States and abroad. The company’s platform covers local business categories, from restaurants to financial services. Most shareholders do not vote.  Reading through 95+ pages of the proxy takes time but your vote could be crucial. Below, how I voted and why.

Read Warnings below. What follows are recommendations on how to vote the proxy in order to enhance corporate governance and long-term value.

Egan-Jones Proxy Services recommends against Directors who served longer than 10 years since they are no longer considered not independent. Tony Wells falls into that category. They also recommend voting against members of the compensation committee when voting against pay. Since I voted against pay (see below), I voted against all the compensation committee members up for election: George Hu, and Tony Wells. Notice that Wells fits in both categories.

Vote: AGAINST Hu and Wells.

I have no reason to believe the auditor engaged in poor accounting practices or has a conflict of interest. Egan-Jones recommends voting against the auditor if they served for seven years. Independence becomes compromised by that time. Deloitte and Touche served more than seven years. No other issues appear significant

Yelp Summary Compensation Table shows the highest paid named executive officer (NEO) was CEO Jeremy Stoppelman at $7.96M. I’m using Yahoo! Finance to determine market cap ($2.976B) and I define large-cap as $10B, mid-cap as $2-10B, and small-cap as less than $2B. Yelp is a mid-cap company.

I agree with Calvert and NYC Pensions. (see below: Yelp 2021 CorpGov Recommendations) CEO pay is not adequately correlated with shareholder return. Additionally, Pay was above median.

Given my concern for the growing wealth disparity, I voted Against Pay and compensation committee members.

The proposal comes from me (James McRitchie), written by The Shareholder Commons.

The purpose of the Proposal is to better address the inevitable tension between shareholder interests and stakeholder concerns. The Proposal’s suggested resolution—conversion to a benefit corporation—is celebrated by Leo Strine, the former Chief Justice of Delaware. Chief Justice Strine argues conversion to benefit corporation status resolves the contradiction between company-first shareholder primacy and the need to account for the full impact of business operations:

So how to resolve this legal impasse? A recent innovation offers a sensible answer. … [The benefit corporation] puts legal force behind the idea that a business should have a positive purpose, commit to do no harm, seek sustainable wealth creation, and treat all its stakeholders with equal respect.

Yelp’s opposition statement fails to consider the gap between what it can do to address stakeholder interests as a conventional corporation and what it could do as a PBC.

Most Yelp shareholders are diversified investors who depend on an economy that succeeds for everyone over the long term. As a PBC, Yelp could better consider the long-term risks to multiple stakeholders and the overall economy, as well as to our Company. Yelp would be incentivized to protect you as a diversified shareholder by limiting activities that undermine healthy systems necessary for a successful economy. These social and environmental costs on the economy are not insignificant. At $2.2 trillion a year, they equal more than 2.5% of global GDP. While Yelp may increase its isolated return to shareholders slightly by applying a company-first shareholder primacy model, its diversified shareholders will pay for the costs it externalizes.

As a PBC, Yelp would have a clear advantage with regard to its customers. Investing with Yelp would be like hiring a reviewer or screener who owes you a fiduciary duty instead of one more concerned with how much they profit from you.

I looked up a few funds in our Shareowner Action Handbook. Calvert voted Against our PBC shareholder proposal and the Pay item.

The potential benefits and risks for companies to become public benefit corporations are largely untested.

CEO pay exceeds the 75th percentile of peers and the company’s performance is below the 75th percentile of the peer group. A vote AGAINST this proposal is warranted. The CEO receives a $1 base salary and there is no STI program. Although LTI awards are now at least half performance-based, the performance shares utilize one-year goals. Further, although the initially granted performance shares were entirely forfeited due to the negative impact of the pandemic, the earnouts from the additional mid-year performance shares exceeded the initially granted target number of shares, effectively resulting in above-target earnouts. Such additional LTI awards are generally not viewed as an appropriate reaction to the COVID-19 pandemic by many investors that generally expect annual-cycle LTI awards be based on multi-year rigorous goals.