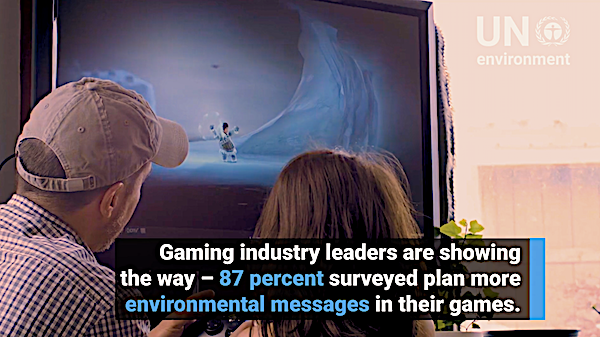 Corporate Governance Gaming: The Power of Retail Investors is delicious snacking, not just for Robinhood and Reddit GenZ’ers, but also for some Boomers who have tried to democratize corporate governance for decades.

How many times have we rolled our eyes reading about GameStop and the frenzy of meme stocks? Crazy? Yes, but also exuding potential, explored in this paper by Sergio Alberto Gramitto Ricci and Christina M. Sautter. If video games can educate, they can also facilitate democracy. Listen to Ricci and Sautter on Business Scholarship with Andrew Jennings. Sautter will join our little Corporate Accountability group on November 15.

The GameStop saga and meme stock frenzy have shown the pathway to the most disruptive revolution in corporate governance of the millennium. New generations of retail investors use technologies, online forums, and gaming dynamics to coordinate their actions and obtain unprecedented results. Signals indicate that these investors, whom we can dub wireless investors, are currently expanding their actions to corporate governance.

Wireless investors’ generational characteristics suggest that they will use corporate governance to pursue social and environmental causes. Their engagement with corporate governance has the potential to spark a social movement. The movement would be based on disintermediation of investments and aimed at bringing business corporations to serve their original partly-private-partly-public purpose.

This article discusses premises, architecture, and characteristics of the movement that would cause business corporations to re-marry their partly-private-partly-public purpose. If such a movement proves successful, the paradigm shift that finally makes corporations serve the welfare of a broader range of stakeholders would happen at the hands of shareholders.

Retail investors created a revolution in early 2021. They coordinated to invest in GameStop Corporation and other “meme stock” companies, trading on hype, rather than fundamentals. Will monkeys soon run the zoo? A favorite slogan is “apes together strong,” from “Rise of the Planet of the Apes.”

GameStop was been described as “a melting ice cube.” Its disc-based business was analogous to Blockbuster vs Netflix. Retail saw declining companies they loved, hoping to rescue them while sticking short-sellers who seem to profit from destruction. Publicity from Redditers and celebrities led GameStop to surge almost 3,000% in January 2021.

Most use Robinhood, founded to “provide everyone with access to the financial markets not just the wealthy.” Robinhood launched IPO Access in Spring 2021, enabling retail investors to directly purchase IPO shares. Members of Congress speculate the real effect of Robinhood and Reddit is to democratize “financial addiction.” There was initially little or no evidence more democratic corporate governance might ensue from corporate governance gaming.

Since Mr. Rogers, many have speculated video games could educate and engage. The UNEP launched Playing for the Planet Alliance. The UN also used gaming to survey over 1.2 million people in fifty countries on their attitudes regarding climate change. The Peoples’ Climate Vote was Gaming for Social Change on a massive scale.

GenZ grew up wired culture, typically getting their first cell phone at age 10.3.  Unlike many Boomers who grew when wages were rising, most GenSers watched their parents GenX) struggle financially. They “are hyper-aware of income inequality and the disparities in access to wealth in America.”

Gaming now brings in more revenue than both the movie and North American sports industries combined. 90% of GenZ’ers, are gamers; 73% own video game consoles. Ricci and Sautter provide some good evidence Millennials and GenZ might help us achieve a more democratic form of corporate governance. Corporate governance gaming might just be key.

According to Credit Suisse, retail investing doubled from approximately 15-18 percent of trades in January 2020 to 30 percent of all trades in January 2021. Millennials and GenZ’ers turned to investing apps as a form of entertainment. 22% of GenZ survey respondents opened a brokerage account in 2020. Millennials were second with 17%. Many invested in companies they patronized.

Like one of my nieces, many invested their stimulus checks in April 2020, favoring “self-directed investments” and trading apps, instead of mutual funds and ETFs. They did their “research” on Reddit, TikTok, and StockTwits. Ricci and Sautter see a tidal wave coming. These younger generations will inherit” $68 trillion in assets over the next two decades.” That is 70% of the assets controlled by US households.

They are more motivated by ESG values than profit. Public is an app that categorizes stocks through themes that facilitate value-driven investing. The authors assert that wireless investors will evolve from trading to engaging. For example, a Megathread was formed to discuss how to vote at the 2021 AMC Entertainment shareholders’ meeting. I have been posting vote recommendations for decades but I was before my time. Now I am on the wrong platforms. I obviously need to engage in corporate governance gaming.

Want to put Michael O’Leary on the spot in September about proxy voting? Sign up for our Corporate Accountability group and ask him how they plan to vote proxies of Transform 500 ETF (VOTE). As Ricci and Sautter argue, “mutual fund managers would need diabolic mindreading skills to vote shares in a fashion that accurately mirrors the preferences of the beneficiary with respect to each item of a shareholders’ meeting agenda.” VOTE will do much better than the Big 3 but could probably do even more.

Millennials and GenZers might tire of donating corporate governance powers to the managers of institutional investors. Trading apps have lowered the transaction costs of buying, holding, and trading shares to zero. Sites like docoh offer financials and filings. Trading tips are exchanged on Discord and Twitch. Why not apps to determine which board directors and what proposals to vote for?

Voting decisions will be based entirely on the early votes of these pre disclosers, their voting histories and the user’s slider positions.

Coleman now goes by Bradley August. He is still working on related work but I am not sure it would be called corporate governance gaming at Bloomberg.

Another factor driving retail voting will be more efforts by issuers. Since several brokers are no longer voting uninstructed shares corporations will have a hard time getting a meeting quorum. New communication strategies and channels decrease the costs of collective action. Ricci and Sautter might benefit by reviewing MoxyVote and As You Vote.

Like our friends at The Shareholder Commons but from a different perspective, the authors argue retail investors will decouple their economic interests from their governance goals. They can pursue their governance goals in coordinated powerful groups of investors with little regard for economic interest on a granular scale since they have a basketful of equities, not just a few. They see themselves as citizens first, then as investors, and will hold their companies responsible for externalizing costs.

The authors discuss diffusion of innovations (“DOI”) theory. New apps are creating both common knowledge and  “knowledge of other people’s knowledge.”

Because wireless investors are already using communication channels like Reddit, Discord, Twitch, WhatsApp, and Twitter to exchange investing ideas, it is only logical that they would use the same communication venues to ultimately achieve a critical mass for voting… the real shift in the way shares are held and voted will happen when a critical mass of retail investors engage with the governance of business corporations.

When a certain threshold of “participants” is reached, the benefits of making voting decisions exceed the costs of doing so. “To a large extent for a citizen, the marginal benefits of voting shares according to ESG principles would arguably exceed those of maximizing financial return.” The result will be a re-marriage of business corporations with their mix of public/private purpose roots. Share ownership could return to, or surpass, the level of granularity characterizing the corporations of the Berle and Means era. Disintermediation re-enfranchises citizens to engage using their corporate votes.

I am reminded of What They Do With Your Money. We currently pay record-keepers to check that our savings are going to the right place; mutual-fund managers and staff; third-party research firms and databases to help managers choose which stocks to buy; another set of advisors to help vote all those proxies; listing platforms so investments in the mutual fund can be bought and sold; brokers who handle the fund’s orders; transfer agents to look after those securities; agents to price them for reporting purposes; on and on and that doesn’t even touch on many of the more obscure aspects of our financial system, such as the fact that mutual funds are buying derivatives, not actual stock. All those charges reduce pensions by 25% to 40%. That’s corporate governance gaming of a different sort. We are being gamed by the financialization of the economy.

That’s a lot of money saved. A little could be put towards low-cost sources to help wireless investors determine which directors have good ESG records. The shift in corporate governance would transform the very purpose of the corporation.

After decades of debates on whether corporations should pursue any goals, but maximizing returns for shareholders, shareholders themselves could align the aim of a corporation with that of socially and environmentally conscious citizens. Taking a page from Accountable but not going as far as asking for a public benefit corporation, we may soon ask Apple and other shareholders if our articles of incorporation are inspiring enough:

Millennials and GenZers are striving to contain climate change risk, systematic racism, deep financial inequality, and social stability risk. A framework of ESG-inspired corporate purpose based on systematic stewardship would allow companies to solve, instead of aggravating, the enormous problems we face.

Corporate Governance Gaming fits nicely in the framework of Moving Beyond Modern Portfolio Theory, Accountable: The Rise of Citizen Capitalism and Rethinking Securities Law, which I hope to review soon. Reuniting finance with human values and agency is crucial to avoid a less habitable planet. Materiality is legally defined as what facts “a reasonable investor” would consider in making investments. Materiality is always evolving. Future investors will want information that helps them ensure their investments not only ensure a financially sound environment but a salubrious environment. Corporate Governance Gaming can format material facts, enabling users to transform our material world.

Accountable: The Rise of Citizen Capitalism