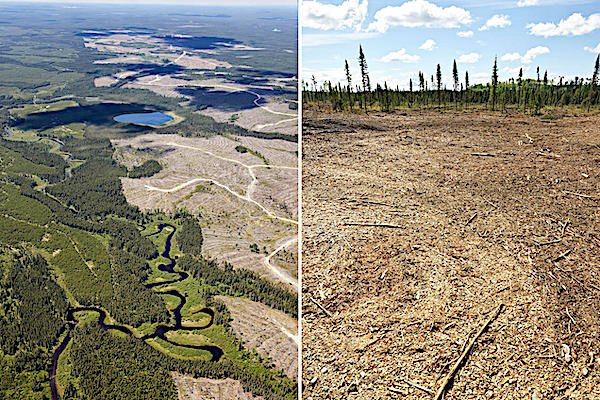 #FlushPGDirectors is the creative hashtag used by a coalition calling on Procter & Gamble (Ticker: PG) to vote against Angela Braly and James McNerney, key Directors. This is because they have failed to address ESG human rights and environmental violations in supply chains.

BlackRock, Vanguard, and State Street have made bold commitments to use their proxy votes to address the climate crisis. These Wall Street giants are the three largest shareholders in Procter & Gamble (docoh). It is time for the and all shareholders of P&G to vote their values.

Procter & Gamble (P&G) is the world’s largest consumer brand. Unfortunately, its products, from toilet paper to shampoo to shaving gel, are linked to ecological devastation in some of the world’s last intact forests. Over the last three years, P&G has endured grassroots pressure in Cincinnati and nationwide. Petitions from over 100,000 consumers were filed from consumers in 2020. As a result, investors passed a shareholder resolution, which the board opposed, demanding P&G stop destroying forests.

The company made small changes to mitigate its harmful impacts, but its reforms have been cosmetic at best. The destruction continues. P&G’s operations continue to drive environmental destruction, land grabbing, and human rights violations in its supply chains from Canada to Indonesia. In addition, the company’s suppliers remain embroiled in protracted land conflicts with local communities, while P&G refuses to hear, let alone address, grievances. P&G’s response has been managed by sustainability staff and its massive PR machine – while P&G’s C-Suite Executives have ignored the problems. This is why two key members of P&G’s Board of Directors have to go. #FlushPGDirectors 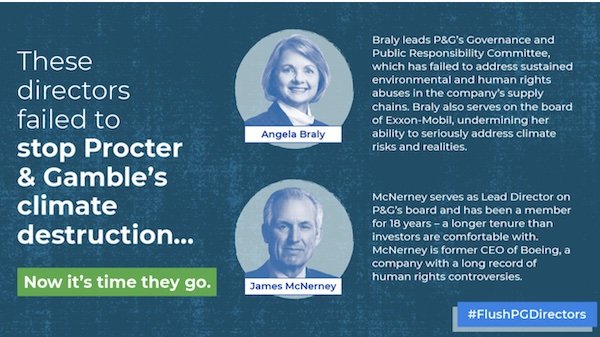 Angela Braly is the chair of P&G’s Governance & Public Responsibility committee on the board. She has served on the board since 2009. She is responsible for guiding the board’s recommendations on social responsibility issues, including human rights and sustainability. In addition, Ms. Braly serves on the board of ExxonMobil, and until earlier this year, was the chair of their Public Issues and Contributions Committee. However, ExxonMobil’s environmental track record undermines Ms. Braly’s credibility in guiding the P&G board’s response to sustainability concerns.

Given her utter failure to address P&G’s human rights and environmental violations, Angela Braly should be voted off P&G’s board. #FlushPGDirectors

James McNerney has been P&G’s Lead Director since 2003. He has served on the board for 18 years, nearly twice the national average for directors serving on corporate boards. That should raise red flags for many investors whose policies note discomfort with boards that have overly long tenures. In addition, he is the former CEO of Boeing and oversaw the development of the catastrophic 737 Max, raising questions of his ability to respond to risks appropriately.

For overstaying his welcome, failing to take responsibility for products that drive ecosystem collapse and cost lives, James McNerney should be voted off of P&G’s board. #FlushPGDirectors

Ten months after Procter & Gamble’s shareholders resoundingly called on the company to address its impacts on climate-critical forests and indigenous rights, P&G has failed to take meaningful action. In light of this immense failure of leadership through its tissue and palm oil supply chains, organizations call for P&G’s Board of Directors to be held accountable.

Last year’s shareholder proposal by Green Century Capital Management passed by 67% of shares voted. It called on P&G to determine how the company could “increase the scale, pace, and rigor of its efforts to eliminate deforestation and the degradation of intact forests in its supply chain.” Green Century withdrew their follow-up proposal, due to progress made. See their press release. It includes the following from Green Century Shareholder Advocate Thomas Peterson:

P&G’s new policies are a step towards guaranteeing that wood pulp suppliers will be required to prevent deforestation and acquire FPIC from Indigenous Peoples and forest-dependent communities. But there is much more work to be done to ensure that the company’s supply chain stops contributing to the degradation of the Canadian boreal, the most carbon-dense forest in the world.

Others from the prior coalition contend that while P&G has published a report and webpage outlining its sourcing policies, it has not addressed the fundamental issues that investors have raised. Nor has it reduced the impacts its operations are having on communities and forests.

P&G has shown that it is unable and unwilling to address the underlying risks that led to this shareholder proposal. Namely:

Alarmingly, despite calls for P&G’s leadership to engage in these issues, the company continues to delegate responsibility to the staff responsible for addressing these issues before they rose to the shareholder level and had largely failed to mitigate risks from these supply chain issues. Moreover, its leadership has shown no sign of making these continued failings a priority.

Ultimately, P&G has shirked its responsibility when it comes to sustainability. Given the stakes of our current moment–a unique and terrifying confluence of climate collapse, dramatic biodiversity loss, and human rights violations by extractive industries–P&G and its leadership cannot avoid responsibility any longer.

That’s why NRDC and others are calling for investors to vote against two long-standing P&G Board members, Angela Braly & James McNerney. #FlushPGDirectors

Last year’s shareholder proposal was the first time a proposal related to forest loss passed in any corporation’s history. It set a precedent for heightened shareholder engagement. It was remarkable because all three of the largest asset management firms–BlackRock, State Street, and Vanguard–supported the measure. The vote passed because of P&G’s egregious track record and because investors are awakening. We have very few years to solve the climate crisis. Investors must use their proxy votes to steer companies in the right direction. It’s the right thing to do, and environmentally regressive companies face growing marketplace risks.

One thing should be clear to P&G’s shareholders this year. It should not take a two-thirds voting majority to convince a company to take the minimum required steps to save forests, climate, and species and uphold human rights. P&G’s meager response proves the company’s leadership does not take its responsibility seriously, as a Fortune 50 company with a market cap of $348 billion, to protect the planet and its people. Investors, and the world, can no longer afford corporate leadership that offers rhetoric and greenwashing rather than real solutions.

It is time for P&G’s Board of Directors to be held accountable. Shareholders should vote against Angela Braly and James McNerney. #FlushPGDirectors

While we are delighted that Procter & Gamble employees are aligned with shareholders because their retirement income depends on P&Gs stock performance, we are concerned workers are sacrificing too much. Workers need a Board aligned with their own values, not those of our CEO, who was paid $24M last year and may believe he can escape the worst ravages of the climate crisis.

We thought our Company was committed to sustainability. “P&G’s USD 41 billion reputation risk, equal to 14 percent of its equity value, dwarfs the cost of solutions,” according to Chain Reaction Research. Climate Action 100+ did not rate P&G highly. Most employees would like to work for a company serving profits, the planet, and people.  Compare with the rating on the same dimensions for Unilever.

Even the Wall Street Journal includes Let Employees Take the Lead on ESG. So are we wrong to believe Procter & Gamble employees want to be in the lead on this and other ESG issues

#FlushPGDirectors and replace them with the voice of workers.

Much of the above is based on correspondence and posts from Jen Mendoza, with Stand.Earth and Shelley Vinyard at NRDC.

What Would Alexander Hamilton and Wilma Soss Think About the P&G Proxy Fight?