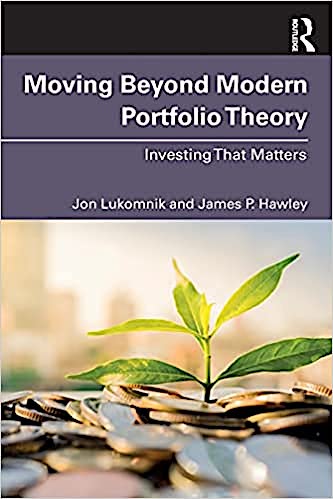 In the spirit of Kuhn, this book eviscerates modern portfolio theory, arguing for a more systemic approach centered around human values and intentionality. I had similar nascent thoughts in 1967 when I concluded economics, based on “rational” actor assumptions of homo economicus, was not grounded in science. Lukomnik and Hawley aptly point out flaws, false assumptions, and alternative remedies.

Reuniting finance with human values and agency is crucial to avoid a less habitable planet. Modern portfolio theory focused on diversity as a way of reducing the impact of idiosyncratic risk. To use a metaphor, dilution is not the solution. Harmful chemicals bioaccumulate; so do the externalities of capitalism.

Harry Markowitz, who developed modern portfolio theory (MPT), defined the purpose of an investment portfolio as maximizing the return per unit of risk. Tools were developed around normative assumptions of how investors should act if they are rational. We built a framework largely around a single metric, volatility. Diversification allowed investors to take on additional risks by reducing volatility. The focus turned from individual securities to portfolios. Looking back, maybe that’s a good thing because looking more closely at the portfolio level than at the individual company level will now help us address systematic risk.

Additional theories were built around MPT. For example, the capital asset pricing model (CAPM) is based on payment for incremental risk. The more volatile the asset, the more must be paid to attract investors. It assumes equilibrium, all assets can be priced and sold in the market. It also assumes investors have access to unlimited funds at a risk-free rate. Risk is determined by comparing the volatility of a given asset to that of the market. But what risks are actually being priced in? Materiality is evolving.

Smart-beta operationalizes MPT and CAPM by discovering factors that undercut both. The efficient market hypothesis assumes all information is knowledge and all information is known, or mostly known by market participants. Theories that took hold, describe investors and markets as theorists want them to be, rather than as they are. These theories laid the groundwork for institutionalized investing.

When Harry Markowitz developed MPT institutional investors controlled 8% of the US equity market. Today, they control 80%. The largest 20 control about 55% of all traded equities in the US and UK. Investment theories convinced us, as individuals, that like economics, the market is complex. Since we cannot beat it, or even understand it, we invest in the indexes.

What might be a good strategy for individuals, may not be so good for society as a whole. One researcher found a 40% premium for being included in the S&P 500. As the authors observe:

The mispricing owing to index inclusion is clearly a complete violation of evaluating portfolio risk in terms of mean-variance volatility, which is a core tenet of MPT. … In a sense, this turns the efficient market hypothesis on its head, becoming less and less efficient as indexes (and exchange-traded funds) are moved not by information as the efficient market hypothesis holds, but can themselves move market (the super portfolio effect). We might call this the inefficient portfolio hypothesis. (22)

What They Do With Your Money, a previous book co-authored by Lukomnick, explains how obfuscation and complexity led to fleeced investors and less accountable corporations. Lukomnick and Hawley cite studies showing that 75-95% of the variability in return is due to systematic risk. Therefore, instead of trying to beat the market, we should try to improve it. That is where the real money is.

Smart money moved to smart-beta. The market fails to consider that companies with greater demographic diversity are, all else being equal, more productive. We can beat the indexes by overweighting diverse companies. Seeking alpha tries to get the market to recognize hidden value at individual companies. Beta activists focus on systematic risks across companies.

Academics have now identified at least 382 systematic risk factors, although other academics (and we) have serious concerns about the validity of some, certainly many are, in fact, robust. … asset flows will chase systematic factors associated with recent positive performance, creating a risk-on/risk-off rotation among those factors. (37)

Computing power is bound to accelerate the incorporation of beta into alpha. A decade ago I toured Truvalue Labs (TVL) with Hawley. TVL was using artificial intelligence (AI) to scrape millions of news feeds around the world. Then they automatically compiled those sources into coherent reports and stories without further human intervention. One could imagine their AI passing the Turing Test if you could interrogate it.

What was previously extra-financial information (noise), was quickly incorporated into investment decisions. “Alpha and beta are on a continuum, with any specific factor able to shift its position relative to being considered as contributing to alpha or beta as less or more capital is deployed to it.” (38)

“According to MPT, your investments are affected by the market but are unable to affect it.” (39) That may have been a good rule of thumb for hapless individual investors before social media.  Systemic risks like climate change or racism cannot be solved by screening and stock-picking. Those issues require coalition-building aimed at companies, trade associations, regulators, and public opinion.

Non-financial factors are more properly labeled “not-yet-financial.” (64) A changing critical mass can certainly change what investors consider material. For example, externalities, such as CO2, can quickly be internalized through a carbon tax.

The social construction of materiality is evidenced in comments from the Sustainability Accounting Standards Board (SASB) to the SEC, which is looking to broaden disclosure standards. TVL back-testing could predict which factors SASB would, years later, define as material.

SASB “socializes determination of materiality as it occurs,” into concrete standards. TBL spotlights issues market participants begin to track. (66) Since materiality is defined as what facts “a reasonable investor” would consider in making investments, materiality is always evolving. Yesterday’s “crazy” foresight can become tomorrow’s “reasonable.”

The authors cover a plethora of topics in a slim volume. I will forgo discussing short-termism, double materiality, the rise of corporate governance, the transition to ESG, divestment vs engagement, targeted products, and other topics subject to scrutiny in Moving Beyond Modern Portfolio Theory.

By now, the largest institutional investors have begun to realize, as universal owners, they need to influence individual companies and markets. “Incorporating climate risk into an institutions’ investment decisions was first prohibited, then permitted, and may soon become mandatory.” (92)

We Are All Beta Activists Now

In the final chapter, the authors claim we are all beta activists now. Evidence BlackRock’s embrace of climate risk as an investment risk, Nordea’s investigation of anti-microbial resistance, State Streets “Fearless Girl” publicity around diversity, Domini’s sustainable forest project, Federated Hermes combating bias in artificial intelligence (AI), and the investor mining and tailings initiative led by a coalition of investors.

Lukomnik and Hawley argue stage three risk mitigation efforts “have probably caused, and will continue to cause, a market re-rating of at least 2-5 percent” or $2 to $5 trillion in global wealth.” Readers could quibble with these estimates.

I co-filed a petition in 2002 with the SEC to allow proxy access proposals. As a frequent filer of such proposals, I also cited studies that suggest the New York City’s Boardroom Accountability Project created a market impact of $25 billion in excess returns. Given the constraints eventually placed on proxy access through private-ordering, and the fact that it has never been used effectively (except in one unusual case), those numbers may represent a figment of the collective imagination. Investors anticipated using a tool that never materialized.

Reintegration of Human Values Into Investing

As the authors note, “the non-asset price impacts of stage three corporate governance are multiples greater, particularly when considering the extended risk mitigation and extended intermediation/asset allocation impacts.” (my emphasis) That is where we should focus.

The real benefit of “adding third stage corporate governance to social, and environmental systems” is “the ability to keep those systems functioning in the future.” (110) The real benefit of Moving Beyond Modern Portfolio Theory is the reintegration of human values and intentionality into investing.

“Stage three corporate governance redefines investing to include not just security analysis, trading, and portfolio construction, but also a panoply of tools of intentionality. … That is a much more self-aware and nuanced dynamic than MPT’s willful blindness to all but price, volatility, and correlation.” (118) (again, my emphasis)

As Michael O’Leary and Warren Valdmanis write in the next book I hope to review, “capitalism is nothing more than the sum of our individual choices. Our economy is no more moved by an invisible hand than a Ouija Board is moved by invisible spirits. It’s just us.” (229)

Moving Beyond Modern Portfolio Theory lifts the curtain to reveal finances false assumptions.  The social construction of investment theories and markets allowed externalizing costs onto others (e.g., racism, sexism, inequality) and onto overburdened natural systems. To pass a democratic society and salubrious environment onto our great-grandchildren we need to construct an economy that integrates our values as investors with our values as people inhabiting a fragile world.

MPT – Why Investors Might be Climate Allies: Corporate Governance Today