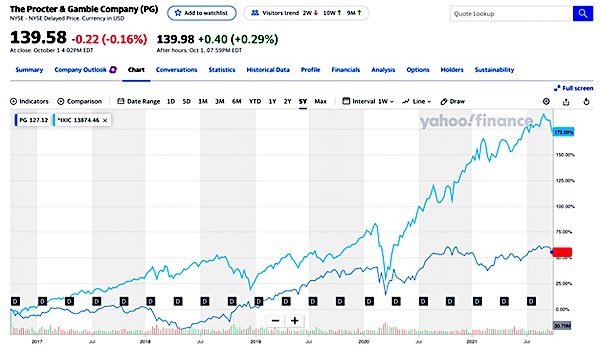 As employees can see in the graph above, you could have made three times as much by investing in the S&P. We are confident that with a voice in the Boardroom, Procter & Gamble’s growth can accelerate. To enhance corporate governance and long-term value, see recommendations below. Vote FOR #4 Increase Diversity of Director Nominees: Include Non-Management Employees on Candidate List

The Procter & Gamble Company (ticker PG) provides branded consumer packaged goods to consumers in North and Latin America, Europe, the Asia Pacific, Greater China, India, the Middle East, and Africa. It operates in five segments: Beauty; Grooming; Health Care; Fabric & Home Care; and Baby, Feminine & Family Care. Most shareholders do not vote.  Reading through 90+ pages of the proxy probably isn’t worth your time but your vote could be crucial. Below, how I voted and why.

From the Yahoo Finance profile page: The Procter & Gamble Company’s ISS Governance QualityScore as of September 26, 2021 is 2. The pillar scores are Audit: 6; Board: 2; Shareholder Rights: 7; Compensation: 1. 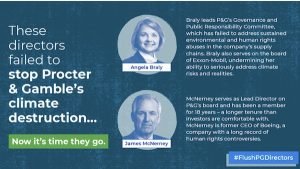 Egan-Jones Proxy Services recommends For all. #FlushPGDirectors is the creative hashtag used by a coalition calling on Procter & Gamble shareholders to vote against Angela Braly and James McNerney. These key directors have failed to address ESG human rights and environmental violations in supply chains. However, it was recently announced that Mr. McNerney is not standing for reelection.

Also, see this statement from Friends of the Earth. Additionally, Angela Braly has served on the Board since 2009, so would not be considered independent by many. Since I voted against Executive Compensation, I also voted against all members of the compensation committee: Terry J. Lundgren, Joseph Jimenez, Debra L. Lee, and Christine M. McCarthy. Get rid of the clog; go for a stronger #FlushPGDirectors.

Procter & Gamble’s Summary Compensation Table shows the highest paid named executive officer (NEO) was CEO David S. Taylor at $24M. I’m using Yahoo! Finance to determine market cap ($339B) and I define large-cap as $10B, mid-cap as $2-10B, and small-cap as less than $2B. Procter & Gamble is a large-cap company.

According to MyLogIQ, the median CEO compensation at large-cap corporations was $ M 14in 2020. Pay is substantially above that amount. Procter & Gamble’s shares underperformed large-caps substantially over the most recent one and 5-year timeframes. Additionally, Procter & Gamble paid Mr. Taylor’s life insurance policy, financial counseling (including tax preparation), physical examination, use of a Company car, home security, and use of company aircraft, including accompanying family and guests.

Egan-Jones Proxy Services found pay aligned with the long-term interest of its shareholders. I do not. Company performance is subpar, yet the CEO is paid handsomely.

All shareholders, especially Procter & Gamble employees invested in various company-sponsored stock ownership plans are suffering. Until their creative wisdom can be heard at the Board level, employees would be better off investing in a large-cap index fund like Engine No 1’s Transform 500 ETF (Ticker: VOTE). As can be seen from the discussion on director compensation, several directors chose not to maximize compensation in restricted stock units, which would have been the optimal choice if they expected shares to outperform the market. Directors are selling more PG stock than buying. Insiders selling. Maybe they see it more as a cash cow than a long-term investment.

The proposal is from me (James McRitchie) so, of course, I voted in favor. Egan-Jones recommends against. The proposal requests the initial list of candidates from which new director nominees are chosen include (but need not be limited to) current or past PG non-management employees to potentially add an employee perspective on the Board.

Management says Procter & Gamble employees have a “significant influence” on Company practices. They fill out an annual survey and have an opportunity to raise issues at company meetings. Employees should be looking for an ongoing dialogue, not settling for what amounts to a suggestion box.

Brother and sister Jules Feeney and Justine Epstein are calling out P&G, the company their ancestor, James Gamble, started in 1837, for sourcing forests critical in fighting climate change to create its tissue products, CBS News reported. They requested to meet with the CEO, which was not granted. (Procter & Gamble’s descendants call out family’s business for wasteful resources). In their opposition statement, the Board claims “our employees have open access to senior leadership.” If direct descendants of the founder cannot be heard, what chance do non-management employees have of being heard?

We offered to withdraw the proposal if the Board agreed to any of a number of options to empower employees and report results to shareholders. Options included appointing a member of the Board to be a liaison with workers, creating a Shadow Board of employees providing input to the Board on strategic issues, as well as other options.

Non-employee directors averaged almost $332,000 in annual compensation. This is for a part-time job that requires attendance at 6 Board meetings plus committee meetings. Interestingly, “Directors were entitled to bring a guest so long as the Director used the Company aircraft to attend the meeting and the guest’s attendance did not result in any incremental aircraft costs.” Also keep in mind that many PG directors also serve on as many as three other boards. 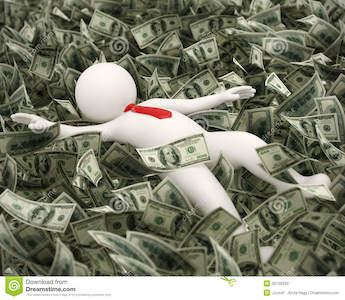 People that fly Company aircraft to attend meetings and earn almost one-third of a million dollars for one of what can be several part-time jobs live in a rarefied bubble. Ms. Whitman’s net worth, for example, exceeds $108M. Mr. Lundgren’s net worth was estimated at more than $95M back in 2017. Most of us have seen this kind of wealth, but only in movies. Current or past PG non-management employees would bring a more down-to-earth perspective to the Board.

Envision a typical PG employee or customer. Are they going to be making suggestions to directors with a net worth of $100M? Will those directors even take a call or open an email? Directors who are or have been non-management PG employees are more likely to be open to feedback and ideas from employees and customers than directors who are multimillionaires many times over. Innovation most often comes from good ideas percolating up, not down.

It is also likely that PG employees are more likely to share values with typical customers than are current directors. For example, PG placed last with regard to sustainability on paper products like toilet paper. (P&G Stuck in the Past in a Shifting Tissue Marketplace) Those swimming in money are less likely to suffer from climate change than the rest of us. They can always move to higher ground, build fireproof mansions, or retreat to New Zealand.

In looking up a few funds in our Shareowner Action Handbook, I see Calvert voted For all items, including #4. Pensions & Investment Research Consultants Ltd (PIRC), Europe’s largest independent corporate governance and shareholder advisory consultancy, advises: Against Braly for her role in failing to address sustainability issues; Against Taylor as combined CEO/Chair and for failing to address human rights proposal; Against Woertz for lack of independence after 9 years of service; Against Auditor as not independent after 131 years without rotation; Against Compensation for failure to balance performance and reward; For #4 “It is considered that the appointment of representatives of (non-management) employees to the board has the potential to create a positive influence in areas of decision making normally reserved for the Board and senior management. The election of employee-representative director(s) is common practice in a number of major economies, and is considered to be an effective way of ensuring that employee views and concerns are considered properly at board level.”

We anticipate that the 2022 annual meeting of shareholders will be held on Tuesday, October 11, 2022. Pursuant to regulations issued by the SEC, to be considered for inclusion in the Company’s proxy statement for presentation at that meeting, all shareholder proposals must be received by the Company on or before the close of business on April 29, 2022.