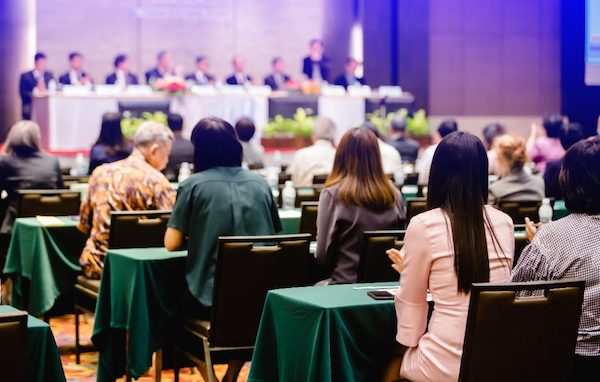 CorpGov.net 2021. We said goodbye to the Trump administration, filed shareholder proposals, held weekly discussions on corporate accountability in 2021, helped shape the SEC’s repeal of several Staff Legal Bulletins, the proposed N-PX rulemaking, and sued the SEC to overturn rules that harm the rights of Main Street investors. It was a productive year at CorpGov.net. I expect 2022 to be even better. The following post is a review of 2021 and a look forward to 2022.

Most of my work is centered around filing, defending, negotiating, and promoting shareholder proposals. I hope to reduce the proportion of my work going into such efforts as others get more involved. Looking back at 2021, my partner (Myra K. Young) and I filed 92 proposals, yielding an average vote of 49%. That total includes proposals that were lost to no-action challenges as getting a vote of 0%. Proposals that were withdrawn because of board implementation were counted as getting a vote of 100%.

I continue to help drive basic standards in corporate governance. My most innovative proposals focused on empowering workers by asking companies to include employees in board candidate pools. These were a long shot but I could not even get support from public pension funds with workers on their own boards. Later in the year, I concluded these proposals were based on a co-determination paradigm that is seen as a European import without the supporting infrastructure or culture. A new path for 2022 is discussed below.

Similarly, asking companies to convert to public benefit companies did not win many votes, nor did asking them to address externalizing costs. Companies so vigorously opposed the latter that those proposals never saw the light of day. Hopefully, we raised awareness, and, at least on addressing externalized costs, we see a way forward in 2022.

CorpGov.net 2021 Proposals Not in the Proxy

If we look only at CorpGov.net 2021 proposals that did not go to a vote, we won more of those than we lost, so averaged 63% support. We lost 17 no actions (0%). We withdrew 29 after reaching an agreement (100%). The highest number of proposals that lost no-action challenges were aimed at addressing externalized costs and requiring a majority vote for directors.

We have learned how to better frame the proposals on externalized costs going forward and expect SLB 14L will also help. The ordinary business exclusion will no longer apply to matters of significant social policy, such as externalizing costs.  “Micromanagement” will no longer pose such a threat if proposals reference recognized national or international guidelines. Work of the Shareholder Rights Group and The Shareholder Commons has been central in removing roadblocks. See SEC Resets the Shareholder Proposal Process. Listen to The Sustainability Story with Matt Orsagh.

By far, the highest number of withdrawals due to agreements reached was for proposals to require a majority vote for uncontested directors. This standard should be implemented at all companies. Yet, less than half of companies in the Russell 3000 have adopted the standard. Large funds should file such proposals at all portfolio companies that have failed to adopt this basic measure of corporate governance.  They could hire a student assistant to do it over the course of a few weeks. The most complicated part of the assignment would be calendaring required meetings under the new SEC rules. 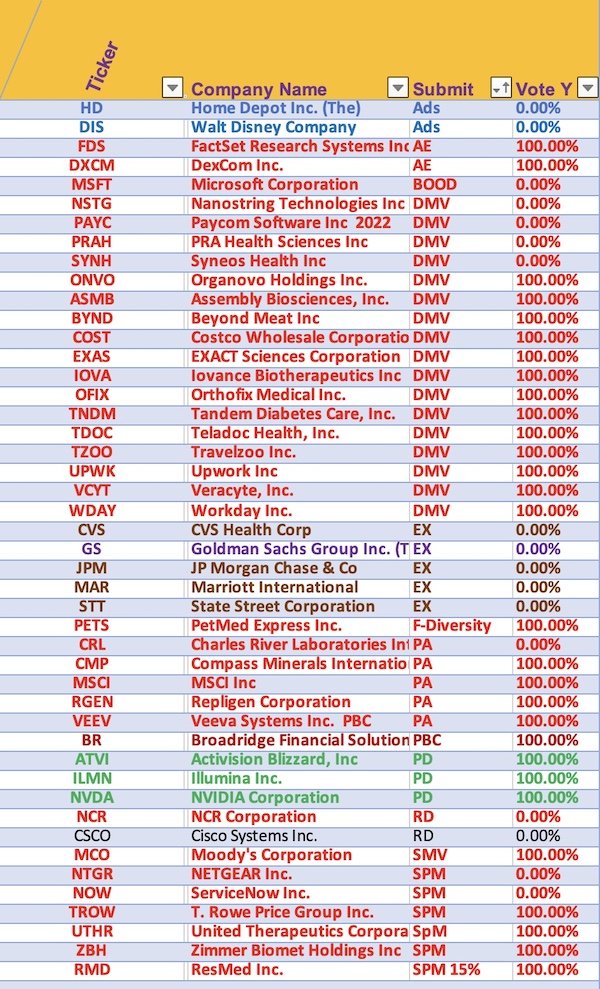 Of CorpGov.net 2021 proposals going to a vote, new types of proposals fared poorly. Where large funds do not have proxy voting policies they often deferred to management. 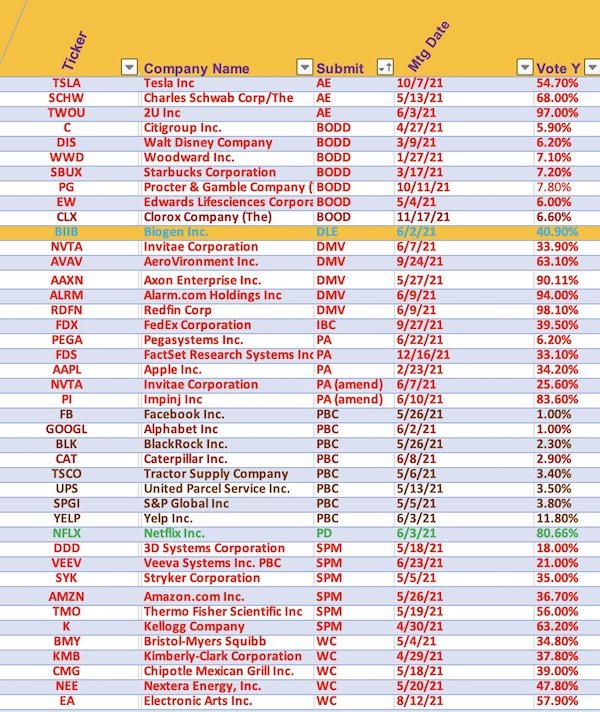 Spring 2021 CorpGov.net Proxy Proposal Results went into a little more detail and not much has changed since then. Adding those withdrawn due to agreement to those won through the proxy vote, we prevailed 41 times.

Joel Makower of GreenBiz did not focus on proxy votes but was interesting nonetheless.

Boards Face Backlash as ESG Tips the Scales. A tectonic shift in the focus toward environmental and social topics occurred during the 2021 proxy season. Companies are increasingly engaging with shareholder proponents to reach a compromise of some form on the proponent’s request in exchange for withdrawing the proposal. Support from the largest investors reached a tipping point.

One year-end review podcast worth a listen is The Corporate Director Podcast. They discussed ISO 37000, the first international benchmark defining good governance, as well as the WeWork decision and UN IPCC report.

Glass Lewis The rapidly evolving priorities of institutional investors were evident in 2021 vote outcomes on director elections and pay proposals, while a slew of new shareholder proposals set sights on holding companies to increasing standards for climate performance.

The Interfaith Center on Corporate Responsibility. In the 2021 proxy season, a record 20 ICCR member-sponsored proposals passed at corporate annual meetings, many supported by management. Not only did the number of majority votes more than double versus 2020, but the votes also achieved record highs. The average majority vote in 2021 was 77% compared to 60% in 2020. BlackRock supported 45 or nearly 35% of the 128 ICCR member-led resolutions appearing on the proxy this year, a significant increase from the 7 out of 124 they supported last year. This year ICCR members withdrew 113 resolutions for agreement, representing 38% of all resolutions filed.

As You Sow (AYS) reported a record-breaking season.  “2021 Shareholder Impact Review: Changing Corporations for Good” summarizes 2021 proxy season engagements with 142 corporations. 86 escalated to formal shareholder resolutions. 45 were withdrawn after companies agreed. 21 went to a vote, averaging 43.3% For — with a record five majority votes ranging from 53.5% to 98% support.

We were pleased to work closely with ICCR and AYS this year on many shareholder proposals and in suing the SEC to overturn Trump-era rules limiting the voice of shareholders. We also worked closely with The Shareholder Commons and the Center for Political Accountability. By working together and pooling our resources we can accomplish so much more together than we can separately.

Mainstay filings will continue mostly at smaller companies that have not given shareholders the basic tools needed to ensure we can hold boards accountable. These include the annual election of directors (AE), board diversity, unopposed directors elected by majority vote (DMV), the ability to call special meetings (SPM), act by written consent (WC), and use proxy access (PA) to nominate a small number of directors.

In 2022, I will focus more on employee ownership as a source of empowering workers. My initial batch of proposals focuses on getting companies to disclose share incentives (and voting power) awarded to employees at all levels. Once we have the basic statistics, we can then argue that reallocating incentive shares to lower-level employees will increase productivity, reduce wealth inequality, and have many other benefits to corporations, employees, and society.

At the same time, whenever I filed proxy access proposals for 2022, I asked for provisions that could enable employees to join with outside investors to create the transformation we hope to see with Engine #1’s victory at ExxonMobil. Bringing the insider knowledge of employees together with outside shareholder advocates may be necessary since many directors find it impossible to monitor the firms they govern.

I will continue to expand my working relationship with more expert partners, such as:

Our holdings are listed in the disclosures section of CorpGov.net. If you have expertise on specific companies on that list or issues that should be brought to shareholder meetings, get in touch. Let’s work together.

Most of the time we learned a little of what our guest speaker has been doing over the last 1-40 years. Then we discussed issues of concern to our little group of maybe a dozen people who showed up for the Zoom call. I loved it and learned a lot.

We intend to restart our corporate accountability sessions in February.  So far, we have lined up Leo Strine Jr, Brandon Rees, Jackie Cook, David Webber, Judy Samuelson, Bruce Herbert, and others. Who do you want to have a discussion with? Let me know.

We will be moving to our own Zoom, YouTube, and podcast accounts. Subscribe to CorpGov.net (see top right) to get notified on the time and date of all sessions.

Individual investors are on the precipice of taking matters into their own hands. Millennial investors (ages 25-40) said they would vote their proxy in 2021 but many do not know how to actually do so in a time-efficient manner. Mechanisms are coming. A new rule from the SEC requiring N-PX filings to be useable could drive the big funds to vote shares in better alignment with the values of beneficial owners. Jeff Sommer documents some encouraging signs in Shareholder Democracy Is Getting Bigger Trial Runs. Stay tuned.

The Giant Shadow of Corporate Gadflies