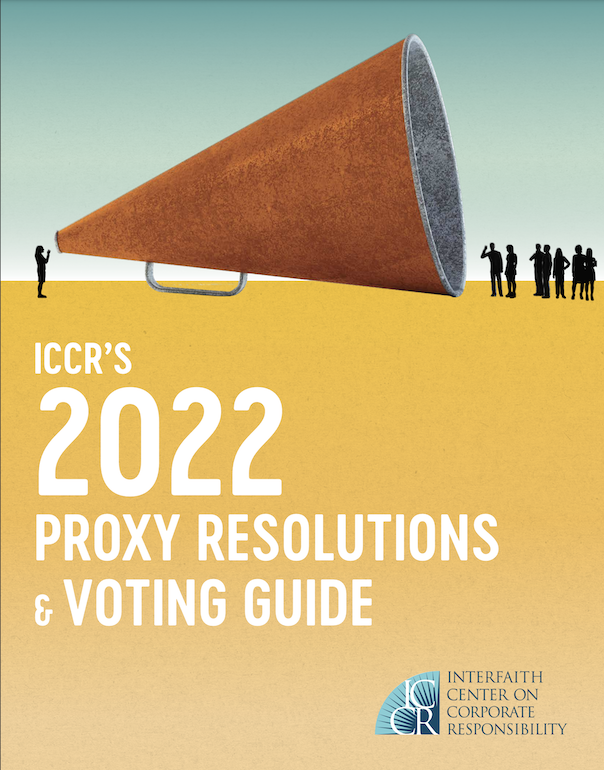 ICCR Proxy Resolutions and Voting Guide now includes all proposals filed so far for the 2022 season by Corporate Governance. I could not be more delighted, since this is the group that is most responsible for inspiring my own work! ICCR has published its Guide every year since 1974. The 2022 Guide discusses 436 resolutions filed by ICCR members — whether as lead or co-filer — as of February 21.

All Corporate Governance readers should support those they can with their votes. ICCR provides links to exempt solicitations and proxy memos. I will have to step up my game if I want to keep up and doubt I will find the time to file an SEC PX14A6G form for each of my proposals.

A Note About the Sharp Increase in 2022 Filings

Despite the restrictive changes to rule 14a-8, members filed a record-breaking 436 resolutions in 2022 compared with 244 at this time last year. We expect that number to grow as additional resolutions are filed through the spring. Members increased the number of proposals they filed in 2022. New members also contributed to the rising number.  I am one of those new members. I’m delighted to have my proposals included in the ICCR Proxy Resolutions and Voting Guide. See page 81 of the Guide. It even includes my photo, wearing one of my signature Hawaiian shirts! It is a joy to work with this group of truly dedicated people.

Resolutions in the ICCR Proxy Resolutions and Voting Guide addressing the climate crisis, racial justice, and diversity equity and inclusion (DEI) were the most numerous, with 103 and 100 proposals respectively. I am delighted to have filed about a dozen proposals this year related to the climate crisis and DEI.

Climate-focused proposals are up 88% versus a year ago, while racial justice/DEI proposals increased 60%. Filings calling for corporations to align their lobbying activities with the goals of the Paris climate accord more than doubled this year. Another group of climate-focused proposals pressed top U.S. banks and insurers to reduce their fossil fuel financing and underwriting. New climate-focused resolutions called for audited reports on the impact of a net-zero by 2050 scenario, for aligning retirement plans with climate goals, and expressed concern about the use of carbon credits.

This growth of filings focused on racial justice and DEI is largely due to a group of 32 resolutions calling for companies to conduct racial equity (REAs) and civil rights audits (CRAs). Last year SOC Investment Group and the Service Employees International Union (SEIU) filed an initial set of proposals calling for REAs and CRAs assessing the impacts of company products, services, and practices on non-white stakeholders and communities of color. This year, the number of proposals in this group more than tripled.

An Increased Focus on the Rights of Workers

As BlackRock’s Larry Fink wrote in his 2022 letter to CEOs, “No relationship has been changed more by the pandemic than the one between employers and employees.” This year there is a large group of proposals focused on worker rights, tackling a range of issues including the provision of paid sick leave and a living wage, employee misclassification, competitive employment standards, employee turnover, freedom of association, and risks from the use of temporary workers. Several called for the inclusion of hourly employee voices on boards of directors.

As in past years, my wife and I filed plenty of proposals seeking more accountability through traditional corporate governance measures. For example, we filed 15 proposals asking for proxy access, 8 seeking the annual election of directors, and 5 requesting that directors be elected by a majority vote. We are delighted to have partnered with the Center for Political Accountability, As You Sow, SumOfUs, The Shareholder Commons, and John Keenan on many innovative proposals. Check out their sites or contact me for more on those proposals.

Our vanguard initiative this year begins a long-term strategy. We hope to address wealth inequality and worker empowerment through greater employee ownership. We filed 14 proposals on that topic. First, we asked boards to describe how they take into consideration pay and stock to workers when setting CEO compensation. Later proposals upped the ante. Now, we seek a matrix, preferably sorted by EEO-1 employee classification, showing aggregate amounts of stock ownership granted and utilized by all U.S Company employees and including associated voting power if any.

Previously, we asked companies to include employees in board candidate pools. Even public pension funds, with workers on their own boards, saw this as a European import, without the necessary supporting infrastructure or culture. In contrast, employee ownership has a long history of bipartisan support in America. Our ability to align corporate values with the values of the typical American depends on workplace democracy, workers having a real voice in how corporations are governed. More equitable distribution of share ownership could tip the balance.

Researchers have calculated that if businesses became 30% employee-owned, it would produce a significant change in the concentration of wealth. Specifically, the wealth share of those with below-median wealth would increase from 1% to 6% of total wealth. The net wealth of the average black family would increase by more than 400%, from $24,100 to $106,271. We are unlikely to see anything like 30% employee ownership in our lifetimes, but we could reasonably target 5-10%.

The IMF finds trickle-down hurts GDP growth a little, while trickle-up helps significantly. GDP growth is actually 0.08% lower in the five years following a 1% increase concentration of wealth in the top 20%. In contrast, increasing the share of income to the bottom 20% by 1% is associated with 0.38% rise in GDP. Since most of the variability in returns for investors is linked to a growing economy (see The Importance of Asset Allocation) and increased employee ownership is positively associated with increased productivity when accompanied by increased voice, a strategy of moving shares from the top of corporate pyramids to the bottom and the middle is a win/win. The only losers will be those whose status is derived from dominating their subordinates.

Look for our proposals in the ICCR Proxy Resolutions and Voting Guide under the sponsor Corporate Governance.

For more trends read the Executive Summary. Download the full Guide here. Watch the launch webinar. Late-breaking news! Exxon released a full Lobbying Disclosure Report in response to the Steelworker’s 2021 shareholder proposal which received 55.6% support. This effort took 10 years. Working on corporate accountability and workplace democracy is not something for those who expect to see immediate changes.