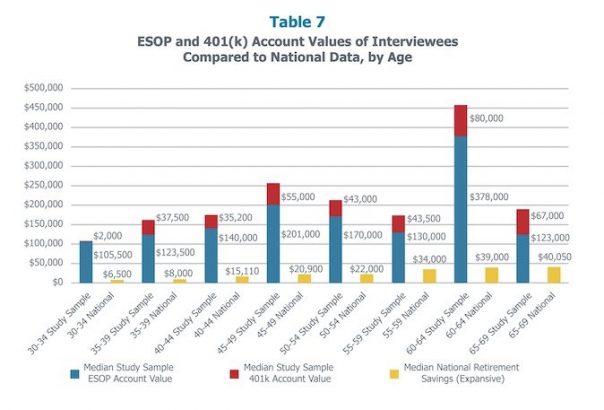 Incentive shares – shareholders have a right to know their distribution. Meta, Amazon, and Repligen argue against disclosure. Working mostly from the same template, they argue distribution of shares to employees is “ordinary business” and “does not focus on any significant policy issue that transcends the company’s ordinary business operations.”

I submitted similar proposals to other companies, some of which expressed delight with the idea of using a matrix format to highlight that inventive shares are widely distributed among employees, not just focused on the CEO, other named executives, and directors. I suspect such equitable treatment is not occurring at Meta, Amazon, or Repligen. All three companies filed letters to the SEC asking that “no-action” be taken if they leave the proposal off their 2022 proxy. The no-action letters all contain the full text of each proposal.

Note on Graphic Above

The graphic above comes from Building the Assets of Low and Moderate Income Workers and their Families, one of may studies cited in the proposal.

In every age range, the ESOP employees we studied earning less than the national household median income had greater wealth for retirement than did their counterparts in the nation, even when using an expansive definition of savings (Table 7).

Employee stock ownership plans (ESOPs) are one important form of incentive shares. The discussion below includes other varieties as well.

With minor variations, here is the “resolved” clause, abbreviated slightly. This is the action shareholders are asking the companies to take:

Shareholders request the Board issue a report annually assessing the distribution of incentives shares throughout the workforce (such as performance share units, employee stock purchase plans, restricted stock units, and options). The report should include a matrix, sorted by EEO-1 employee classification or another appropriate classification scheme with four or more categories showing aggregate amounts of stock ownership granted and utilized by all U.S Company employees and including associated voting power if any. The Committee should issue the report before or concurrent with the next annual proxy statement.

The proposals are titled “Address Wealth Inequality Through an Ownership Culture.” The supporting statements cite studies demonstrating that wealth inequality is a significant social policy issue that brings many problems, such as political polarization.

The Proposal’s principal focus is on the form and type of general employee compensation and the Company’s management of its workforce. While the supporting statement makes a passing reference to wealth inequality as a social policy issue that does not alter the Proposal’s central focus on ordinary business issues. The resolution is entirely focused on granting equity awards to a broad group of employees, which is not inextricably linked to wealth inequality.

The title of the proposal is “Address Wealth Inequality Through an Ownership Culture.” That headline is hardly a “passing reference.” The proposal does not ask Meta to grant equity awards to a broad group of employees, although someday I hope to do so. The current proposal simply asks Meta to report on the current distribution of such awards, including associated voting power if any.

[T]he supporting statements to the Proposal cite to a host of social injustices, including “racial and gender wealth gaps”, “political polarization”, and flat “inflation-adjusted wages”. However, it is unclear how the report requested by the Proposal would address these issues, since the report would merely reflect aggregate employee equity ownership, grouped by categories of employees at the discretion of the Compensation Committee.

Reporting is the first step. For example, to address climate change shareholders first asked companies to report carbon dioxide emissions. Shareholders could then determine if such emissions contribute to climate change. If they do contribute, then shareholders asked companies for their plans to mitigate those emissions. The long-term plan here is similar. First, report how the company distributes incentive shares. If the company is contributing to the problem of wealth inequality, we will then focus on mitigation, most likely through a more equitable distribution of incentive shares.

proposals squarely raising human capital management issues with a broad societal impact would not be subject to exclusion solely because the proponent did not demonstrate that the human capital management issue was significant to the company” (citing to the 1998 Release and Dollar General Corp. (avail. Mar. 6, 2020) and providing “significant discrimination matters” as an example of an issue that transcends ordinary business matters).

Despite that admission, Amazon goes on to argue:

The Supporting Statement includes numerous references to corporate benefits arising from use of equity-based compensation and employee stock ownership, including “better firm performance, fewer layoffs, better employee compensation and benefits,” as well as impacts on “employee engagement and trust” and “business strategy and operations.” These references demonstrate that the focus of the Proposal is on the Company’s management of its workforce through its general employee compensation policies and practices, and any reference to the societal implication of equity-based compensation is at most incidental to this primary focus…

Staff has consistently concurred with the exclusion of shareholder proposals under Rule 14a-8(i)(7) relating to wage reform and wage inequality for hourly and non- executive employees.

Of course, the proposal does not focus on wages and wage inequality, which have been mostly off-limits to shareholder proposals, except with regard to “discrimination matters.” Instead, the proposals focus on share incentives and equity compensation plans. As noted above, that is something companies must allow shareholders to vote on. Shareholders are required to vote on equity compensation plans before they are awarded. It seems incongruous to prohibit shareholders from requesting a report that is largely concerned with implementation.

Wealth Inequality IS a Problem

Reducing inequality is one of 17 Sustainable Development Goals established by the United Nations in 2015. “Income inequality has been compounded by wealth inequality, particularly in countries with already high inequality levels such as the United States of America… It is clear that inequality can be a serious threat to social and political stability.” Goal 10—Why Addressing Inequality Matters

Footnote 4 in the proposal cites 6 facts about economic inequality in the U.S.. I will just repeat 3 here:

None of the companies dispute the idea that wealth inequality is a significant social concern, so I will spend no additional time asserting what is so obviously true other than to note the IMF finds:

Therefore, even if these 3 companies take a strictly selfish point of view, they should want to foster greater equality, since that will likely lead to higher profits in a growing economy.

Wealth Inequality CAN Be Addressed, in Part, With Broadly Distributed Incentive Shares

None of the companies dispute that distributing incentive stock more broadly to employees would result in better firm performance, fewer layoffs, more employee engagement, trust, or higher profits. Instead, they imply there is no nexus between incentive shares and wealth inequality. Shareholder proposals are limited to 500 words, so the proposal could not delve deeply into the arguments. Below, I highlight findings from three studies not footnoted in the shareholder proposals. Click on the titles to go to the reports.

In 2016, the median white family had $147,000 in wealth, compared with $3,600 for Black families and $6,600 for Latinx families. White women had a median wealth of $66,930, while that of Black and Latinx women was just $6,000 and $6,700, respectively. Rutgers’ analysis of the General Social Survey estimated that, in 2018, nearly 23 million employees, representing more than 19% of all US workers, owned some share in their employer. The bottom 37% of workers had less access to company stock programs. A few key findings:

Although many publicly traded companies have made racial justice commitments, few appear to use stock incentives as a means of addressing those commitments.

The Congressional Budget Office found 10% of families held 76% of total wealth. Researchers relying on survey data of younger workers (age 28-34; born between January 1, 1980, and December 31, 1984) by the Bureau of Labor Statistics found employee-owners have, relative to workers who are not employee-owners:

Worker-owners also got more benefits, such as flexible schedules, retirement plans, parental leave, and tuition reimbursement. For example, 23% had access to childcare benefits compared to just 5% of non-worker-owners.

The authors conducted a thought experiment using data from the Survey of Consumer Finances, distribution practices of the most common form of employee ownership, and standards created by Certified Employee- Owned. They examined how the wealth of various populations would change if all businesses were to become 30% employee-owned. While that goal may be overly ambitious, it demonstrates that much lower goals, such as 10% employee ownership, would still result in a significant reduction of wealth concentration.

In permitting the exclusion of shareholder proxy proposals, Rule 14a-8(g) imposes the burden of proof on companies. Companies seeking to establish the availability of exclusion under Rule 14a-8, therefore, have the burden of showing ineligibility. As argued above, Meta, Amazon, and Repligen have failed to meet that burden. Accordingly, Staff must deny the no-action request.