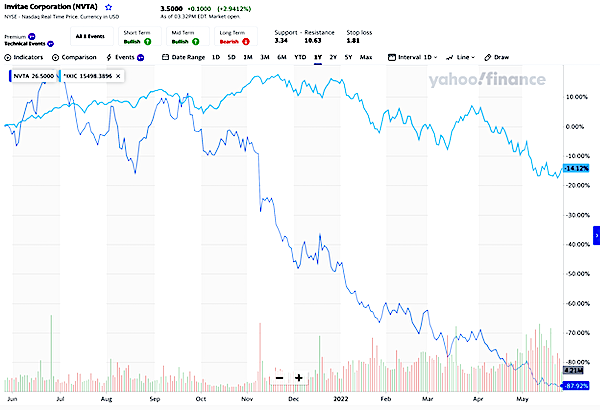 Invitae 2022 annual meeting is June 6, 2022, at 4:00 pm Pacific. It is a virtual-only meeting on the Broadridge platform. Of course, I recommend voting in advance, especially since many companies cut off voting as soon as proposals have been presented. To enhance corporate governance and long-term value, vote Against Eric Aguiar, Sean E. George, Pay: FOR Declassify the Board of Directors.

Invitae Corporation, a medical genetics company, integrates genetic information into mainstream medicine to improve the healthcare of people in the United States, Canada, and internationally. Below, is how I voted and why in short format.

I voted with the Board’s recommendations 40% of the time, so awarded a Proxy Score 40 out of 100. View Proxy Statement via SEC’s EDGAR system (look for DEF 14A).

CEO pay at $8.8M seems high to me for a small-cap of less than $1B and is not adequately aligned with creating shareholder value, as can be seen from the above chart comparing the stock value with the Nasdaq. The CEO-to-worker pay ratio was 54:1. I voted AGAINST Executive Compensation and so would normally vote against members of the Compensation Committee (Crouse, Aguiar, Gorjanc). However, because of the classified board, I vote against both directors up for election.
Ernst & Young LLP has been Invitae’s auditor for 9 years. At some point, auditors can lose their independence if the relationship is too long. Given the absence of other concerns, I voted For.

The opposition statement says three-year terms attract and help retain highly qualified directors. That is absurd on its face. Almost 90% of S&P 500 and Fortune 500 companies have adopted this vital reform. Annual elections are widely viewed as a best practice. Most investors believe the annual election of each director makes directors more accountable, thereby improving performance and increasing company value.

In looking up a few funds in our Shareowner Action Handbook, I see several funds have reported their votes.  You can see Calvert’s votes above. NYC pensions voted against both directors and For all other measures.

To be considered for inclusion in the Company’s proxy statement for the 2023 annual meeting of stockholders, stockholder proposals must be received by the Secretary of the Company no later than December 22, 2022. Proposals should be sent to our Secretary at Invitae Corporation, 1400 16th Street, San Francisco, California 94103. These proposals also must comply with the stockholder proxy proposal submission rules of the SEC under Rule 14a-8 of the Exchange Act. Proposals we receive after that date will not be included in the proxy statement.