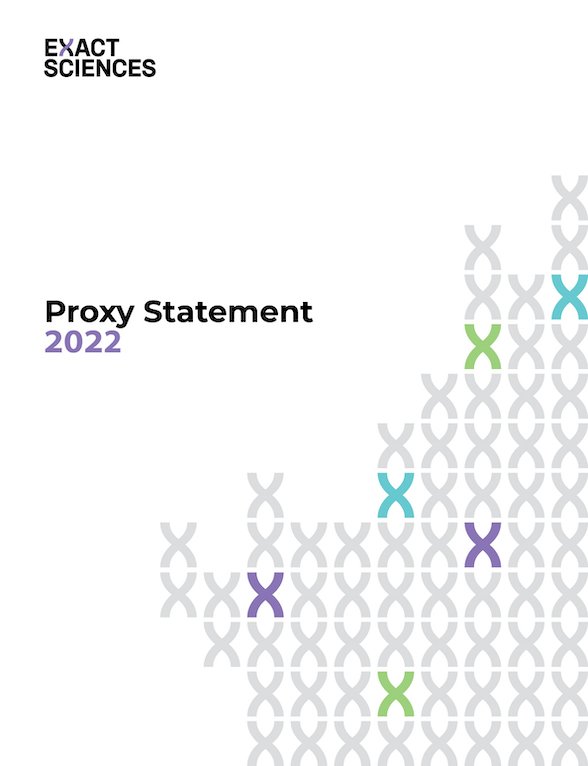 Exact Sciences 2022 annual meeting is June 9, 2022, at 8:00 am Pacific. It is a virtual-only meeting on the Broadridge platform. Of course, I (James McRitchie) recommend voting in advance, especially since many companies cut off voting as soon as proposals have been presented. To enhance corporate governance and long-term value, vote Against Petrovic, Zanotti, Omnibus Stock Plan; FOR Proxy Access amendments.

Exact Sciences Corporation provides cancer screening and diagnostic test products in the United States and internationally. Below, is how I voted and why.

I voted with the Board’s recommendations 38% of the time, so awarded a Proxy Score of 38 out of 100. View Proxy Statement via SEC’s EDGAR system (look for DEF 14A).

From the Yahoo Finance profile page: Exact Sciences Corporation’s ISS Governance QualityScore as of May 1, 2022, is 6. The pillar scores are Audit: 5; Board: 3; Shareholder Rights: 4; Compensation: 10.

CEO pay at $14.6M is too high for a mid-cap company. CEO-to-worker pay ratio was 114:1. I voted AGAINST Executive Compensation and the only member of the Compensation Committee (Zanotti) up for election this year. I am following advice from Calvert regarding Petrovic, who heads the governance and nominating committee, and also with regard to stock plans.
PricewaterhouseCoopers LLP has only been the Exact Sciences auditor for 2 years, so should be considered independent.

As my proposal #6 on proxy access states: “the most essential feature requested is that shareholders forming a nominating group not be limited with regard to the number in a participating group.”

As cited in the proposal Proxy Access in the United States, a cost-benefit analysis by CFA Institute, found proxy access would “benefit both markets and boardrooms, raising US market capitalization by up to $140 billion.

However, such a scenario lacks credibility. Most of our top stockholders have a business model based on low costs. They’ve never filed a shareholder proposal, so are highly unlikely to go through the expense of proxy access.

The Board’s opposition statement also whines that Exact Sciences would be responsible for verifying all procedural requirements. Without group limits, that could be burdensome and costly. However, the real costs would be borne by nominating groups. My proposal is advisory. The Board can easily require that shareholders gather and submit proper documentation and could even require verification by a third party, paid by nominating groups.

The CFA study estimating a $140B rise in market cap was based on proxy access having no limit on the number in participating groups. As the Board’s opposition statement points out, most companies have limited groups to 20 members. As a result, proxy access has only been used once — to return a founder to a board. The anticipated $140B in economic benefits has failed to materialize.

In looking up a few funds in our Shareowner Action Handbook, I see several funds have reported their votes.