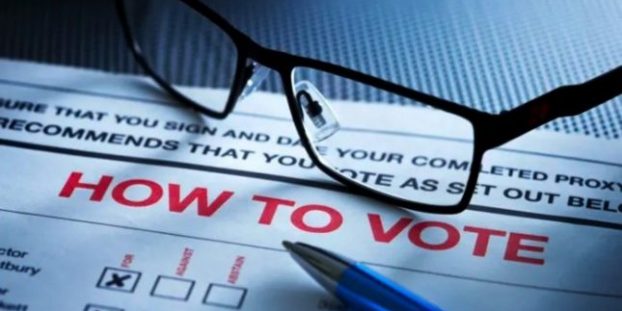 Be sure to vote for each item on the proxy. Any items left blank get automatically voted in favor of management’s recommendations. (See Broken Windows & Proxy Vote Rigging – Both Invite More Serious Crime). I have tried to get the SEC to require that blanks be counted as abstentions with no luck.

I generally vote against pay packages where NEOs were paid above median in the previous year but make exceptions if warranted. According to Bebchuk, Lucian A. and Grinstein, Yaniv (The Growth of Executive Pay), aggregate compensation by public companies to NEOs increased from 5 percent of earnings in 1993-1995 to about 10 percent in 2001-2003. Does anyone have an update to this study?

Few firms admit to having average executives. They generally set compensation at above average for their “peer group.” Peer groups are often chosen by aspiration. The “Lake Woebegone effect” may be nice in fictional fantasy towns, “where all the children are above average.” However, corporations live in the real world. All CEOs are NOT above average. Ignoring that fact partly explains why their collective pay keeps spiraling out of control. We need to slow the pace of money going to the 1% or our economy will fail to serve the majority. The rationale for peer group benchmarking is a mythological market for CEOs. For more on that subject, see CEO Pay Machine Destroying America.

The IMF finds GDP growth is 0.08% lower in the five years following a 1% increase in the concentration of wealth. In contrast, increasing the share of income to the bottom 20% by 1% is associated with a 0.38% rise in GDP. Most of the variation in returns comes from the general market movement. Is the GDP growing or shrinking? The remaining variation comes about equally from asset allocation policy and active management. Pushing money from CEOs to workers helps the economy grow. That helps your portfolio grow.

Additionally, wealth inequality is directly correlated with political polarization. Our government’s ability to act depends on addressing this paramount social issue. If you want to live in a functional democratic society, make sure workers earning more than a living wage and favor proxy proposals and other initiatives that give workers more say in how corporations operate.

Proxies often run to 100 pages or more. Most retail shareholders and a lot of institutional investors are not going to bother reading all that. One of the easiest ways to vote with some intelligence is to find a fund with proxy policies and a voting record aligned with yours. If you can find one that announces their votes in advance (especially if they indicate voting rationale), simply look up how they voted. When it makes sense, vote along with them. I try to maintain a list of such funds. Please let me know of others.

Find more helpful hints for advocacy in our Handbook.