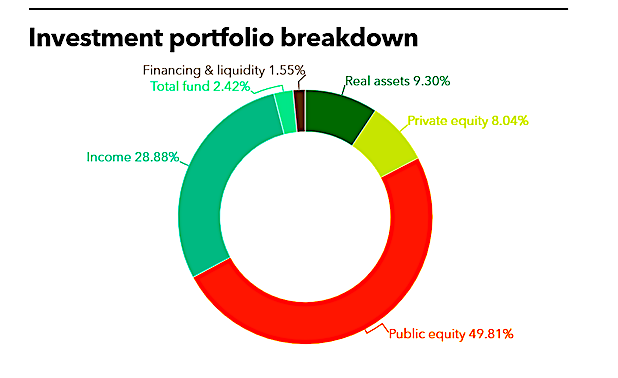 CalPERS investments underperform. CalPERS underperformed for a decade, investment chief says in pitch for more risk. The country’s largest public pension system earned an average of 7.7% per year on its investments over the last 10 years. That’s 1.2% less than a hypothetical peer should have expected to earn in the same time period. To remedy the situation, CalPERS last year directed its Investment Office to expand private equity to 13%.

Modern portfolio theory (MPT) changed the world beginning in 1952. Harry Markowitz went on to win a Nobel Prize in economics in 1990, just about the time systematic risks began eroding the power of diversification. CalPERS Investments might do better by ignoring Markowitz’s presumption that systematic risk cannot be influenced or mitigated. In a world of climate change and political stalemate, investors should not stand by idly and concern themselves with only seeking short-term alpha. Yet, even if we were to turn the clock back 70 years, CalPERS investments aren’t even smart alpha. The S&P 500 earned 14.8% (12.4% adjusted for inflation) over the latest 10-year period. Seeking alpha by piling into private equities is the wrong course. Realistically, there is no real mark to market for private equity. You don’t really know how much is gained or lost until you sell. Yet, CalPERS is lobbying for even more secrecy (AB 386).

Maybe it is time to ditch most of the exotic investments like private equity and real estate that resulted in investigations of previous directors for essentially taking bribes. Index funds cost next to nothing to manage and have historically performed better. If CalPERS wants to get exotic, overweight smart beta factors, such as companies providing shares to employees through an ESOP. That will result in higher returns to investors, employees, and our economy. (Employee Ownership and Wealth Inequality: A Path to Reducing Wealth Concentration)

CalPERS Investments: Bottom Up, Instead of Top Down

The IMF finds GDP growth 0.08% lower in five years following a 1% increase in the concentration of wealth. Increasing the share of income to the bottom 20% by 1% is associated with a 0.38% rise in GDP.  (Causes and Consequences of Income Inequality: A Global Perspective)  CalPERS investments could move pay and stock (with votes) from executives to workers to grow our portfolio, the economy, worker voice, and worker wealth. It would be a win all around, except maybe for the power of billionaire CEOs.

Wealth inequality is also directly correlated with political polarization. (Political Polarization and Income Inequality) Our ability to address a plethora of issues, from climate change to gun violence and racism depends on addressing wealth inequality. CalPERS investments could do more for members and taxpayers by refocusing from short-term alpha to upping beta returns. Overweight broad index funds in favor of companies with more worker ownership, as well as many other factors.

Instead of staff and private equity firms analyzing individual companies, focus on factors measured by big data, such as externalities. For example, excess returns to Facebook based on externalizing costs or addicting users hurt not only CalPERS’ other holdings but the whole economy. If the decisions that maximize Facebook’s long-term cash flows imperil the rule of law or public health, CalPERS investments are likely to be placed at risk. Our managers need to be Moving Beyond Modern Portfolio Theory (MPT).

MPT was based on the belief that investors couldn’t impact the market. In the 1950s that assumption may have been more reasonable. Most of the market was owned by individuals who could not coordinate their activities easily. Now, most of the market is owned (or at least in some way controlled) by large institutional investors like BlackRock, with $10 trillion under management, and CalPERS with $450 billion. The vast majority of the variability in return comes not from stock picking but from systematic risk caused by various beta factors. ESG factors are now the main source of measuring beta risk. “Human capital” is a huge, largely unmeasured, driver given the shift from tangible to intangible assets.

MPT was based on the assumption of information efficiency… everyone knows everything. (No, they weren’t kidding. That was the advice given to “powerless” investors.) Now, the real money is in crunching big data to discover what “extra-financial” factors (not reflected in the accounting books) will be key drivers. According to Lukomnik and Hawley, “academics have identified at least 382 systematic risk factors.” That’s where CalPERS investments will pay off.

For example, years ago the Comptroller of New York City announced a campaign aimed at improving corporate governance at 75 companies by adopting proxy access. That mere announcement caused those 75 companies to experience a 53-basis-point excess return. CalPERS investments should take a lesson from its roots, by targeting companies to “move the herd” and reduce systematic corporate governance risks. Almost 30 years ago a study of companies on CalPERS’ target list for corporate governance improvements found a significant impact. Companies that had underperformed the S&P by more than 75% in the five years prior to CalPERS’ intervention outperformed by more than 50% in the five years following. (CalPERS Effect).

Rather than investing more in secret private equities, CalPERS should be focused on finding ESG and other beta factors that benefit us all.  They should be working in conjunction with Sum of Us, As You Sow, The Shareholder Commons, the Center for Political Accountability, CII, ICCR, LGIM, and other progressive NGOs and funds to drive the herd so that humanity and our salubrious environment are preserved. CalPERS could even activate retail shareholders, especially among its own 2 million members. Encourage them to vote their own shares along with CalPERS by working with companies like iconik, Fennel, and Civex.

No Time to Vote