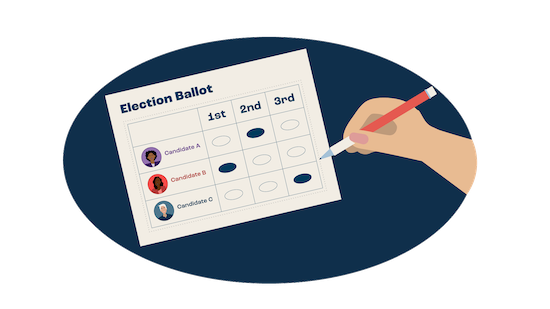 CalPERS Should Adopt IRV for Board Elections. That is the argument Randy Cheek and James McRitchie made in a draft rulemaking petition to the Board in a 9:24 AM email to board@calpers.ca.gov on 9/21/2022 under Government Code section 11340.6. As of the date of this post, the Board has yet to even acknowledge receipt. That feels a little too much like filing a shareholder proposal at an unresponsive company.

Adoption of IRV/RCV for board elections at CalPERS would save millions of taxpayer dollars, foster less acrimony among board candidates, encourage more qualified candidates to run, more voting, and could set an example for corporate boards facing universal ballots.

CalPERS Should Adopt IRV for Board Elections: In Brief

California’s Government Code requires formal petitions to be decided within 30 days. That’s too short for a real discussion of the issues, so we filed in draft form to allow more time for the Board’s consideration.

In 1993, 96 candidates ran for two Board positions. One of the winners received 5.5% of the vote. CalPERS amended the rules to ensure all board members are elected by a majority vote. However, as CalPERS repeatedly experienced, such runoff elections are expensive, costing upwards of $1 million. That’s not the best use of our retirement funds.

The Board rejected a prior petition. CEO Fred Buenrostro indicated, “Any ballot required by an instant runoff voting process may be confusing to CalPERS voters and may reduce voter turnout.”

Frankly, that and similar statements by members of the board were offensive. Preschoolers have used IRV. Given the experience with instant runoff voting from Alaska to Maine, from Oakland to Palm Desert, Buenrostro’s statement showed an embarrassing lapse of judgment… not his only one.

In addition to saving CalPERS millions of dollars, IRV incentivizes less toxic campaigns, as candidates compete for second-choice votes.  Additionally, voters are more likely to turn out when they don’t have to compromise when voting. More information at FairVote.org.

We look forward to discussing this needed reform. Thank you.

CalPERS Should Adopt IRV for Board Elections: Reason for the Rulemaking Request

In 1993, 96 candidates ran for two Board positions. One of the winning candidates received less 5.5% of the vote. We certainly can’t say this was the candidate most voters wanted. CalPERS corrected that situation by requiring a runoff to ensure all board members are elected by a majority vote.

However, as CalPERS repeatedly experienced, such runoff elections are expensive, costing upwards of $1 million. We believe and hope the Board agrees, this is not the best use of our retirement funds.

The proposed amendments would institute instant runoff voting (IRV, alternatively known as ranked-choice voting, (RCV), which eliminates the “spoiler” impact of long-shot candidacies and avoids expensive elections. IRV is equivalent to a series of runoff elections conducted by allowing voters to rank the candidates in order of preference, 1, 2, 3, and so on. The candidate who receives the fewest number of first choices from the voters would be eliminated in the first round of counting. All the ballots choosing the candidate with the fewest number of first choices are then redistributed to the voters’ second choice. Each successive round of counting eliminates the next lowest polling candidate, transferring those votes, until one candidate achieves a majority.

When James McRitchie previously petitioned the board to adopt this form of voting, the March 29, 2006, response by then CEO Fred Buenrostro indicated, “Any ballot required by an instant runoff voting process may be confusing to CalPERS voters and may reduce voter turnout.”

Frankly, we found that statement and similar statements by members of the board offensive as the basis for “respectfully” denying the petition. Given that CalPERS serves public employees, given that public employees on average have substantially higher levels of education than private sector employees, and given vast experience with instant runoff voting in many parts of the country, this statement should now be seen as an embarrassing lapse in judgment.

The implication is that public employees are too stupid to rank candidates. Yet, many studies show that even preschool children are frequently involved in ranking preferences in their environment. CalPERS members are fully capable of ranking candidates.

Staff raised additional concerns in BPAC, Agenda Item 11, May 16, 2006.  The following was Mr. McRitchie’s response to those concerns at that time.

a. The same “fringe voters” decide a runoff (assuming those who voted for candidates who make it to the runoff don’t change their votes); it just takes longer.

b. “Fringe” is code for 3rd The dominant parties often don’t want IRV because voters can vote for who they really want, without fear of helping to elect the candidate they least want.

c. In San Francisco “it took days for the final results.” Yes, as in most elections, unofficial election results were posted on election night. As in any other election, they continued counting absentee and provisional ballots for a couple weeks.

d. In the 11 recent public IRV elections (7 for supervisor in 2004 in SF, 3 citywide races in 2005, and 1 Burlington mayoral race in 2006), the candidate with the most first choices won every race, and every incumbent got re-elected. No “fringe candidates won.”

3. Staff report says San Francisco approval “has not been extended.” IRV vote is in San Francisco Charter, Section 13.102. (http://www.sfgov.org/site/election_index.asp?id=27564) RCV/IRV “shall be use for the general municipal election in November 2002 and all subsequent elections.” With 61% preferring IRV compared to 13% preferring a second ballot, changing the charter isn’t likely.

a. Ranking preferences is an easy concept, understood by most 3-year-olds.

b. The postcard mentioned in item A4 of agenda item 11 of the May 16th BPAC meeting could serve a dual purpose, including education. If not practical, CalPERS could simply include instructions with the ballot.

c. Confusion could lead to lower turnout. Use of Ranked Choice Voting (RCV) in San Francisco’s November 2005 election increased voter participation in the decisive round of the Assessor-Recorder race by an estimated 120,000 voters. (Ranked Choice Voting and Voter Turnout in San Francisco’s 2005 Election http://www.sfrcv.com/reports/turnout.pdf) I have never seen any evidence of lower turnout in IRV elections. What evidence does CalPERS have that IRV reduces turnout? I would happy to rebut an assertion of facts.

Of course, we now have more years of IRV/RCV experience in statewide Alaska and Maine) and many local elections.

In addition to saving CalPERS potentially in excess of $1M for runoff elections, IRV/RCV incentivizes less toxic campaigns. IRV/RCV candidates compete for second-choice votes from their opponents’ supporters, which lessens the incentive to run negative campaigns. Candidates do best when they reach out positively to all potential voters, including those who support their opponents. Voters are more likely to turn out when they can express their choice of candidates without compromise. For more information see Fair Vote athttps://fairvote.org/our-reforms/ranked-choice-voting-information/.

CalPERS Should Adopt IRV for Board Elections: Substance of the Requested Amendments (underline and strikeout text)

(a)  Ballot Specifications and Directions to Voters

(1) Ballots approved under this section shall be simple and easy to understand, and in elections involving more than two candidates for one board position shall allow a voter to rank candidates for that office in order of choice. Sample ballots illustrating voting procedures shall be included in the instruction packet with ballots.

(2) Directions provided to voters shall conform substantially to the following specifications, although subject to modification based on ballot design and vote counting equipment:

(a) (b) The following are declared to be invalid ballots and shall not be counted in the election:

(1)  Votes cast for individuals not listed as candidates on the official ballot.

(2)  The return envelope not signed by the eligible voter, in accordance with the CalPERS instructions.

(3)  A duplicate ballot (paper ballot, online, telephone) received from the same voter.  First ballot received is the only valid ballot.

(4)  Votes cast in excess of that allowed on the ballot or with conflicted ranking.

(5)  Ballots not received within the time period prescribed by the Notice of Election.

(d) (e) In elections involving two or fewer candidates for the same board position, The the candidate receiving the majority vote for each position shall be certified by the Secretary of State as having been elected. In the event that no candidate for any position receives a majority of all valid votes cast, a runoff election will be conducted involving the two candidates who received the highest number of votes.

(f) In elections involving more than two candidates for the same board position the following procedures shall be used:

(1) The top marked choice on each ballot shall be counted initially by election officials.

(2) If any candidate receives a majority of the top choices, that candidate shall be certified by the Secretary of State as having been elected.

(3) If no candidate receives a majority of top choices, the agent shall conduct the instant runoff consisting of additional rounds of ballot counting.

(iii) This process of eliminating the candidate with the fewest votes and recounting all ballots shall continue until one candidate receives a majority of the valid votes in a round.

(iv) If a ballot counting towards some candidate has no more available choices on it, that ballot shall be declared “exhausted” and shall not be counted in that round or any subsequent round.  Ballots skipping numbers or eliminated candidate shall be counted for that voter’s next clearly indicated choice. Ballots with two or more of the same number shall be not be counted in that round unless only one of the candidates with the duplicate ranking is an advancing candidate.

(v) The candidate receiving the majority vote for each position, either outright or after instant runoff rounds, shall be certified by the Secretary of State as having been elected.

(a)  Within three working days after the votes are tabulated for the election and runoff election, if any, the Election Coordinator shall transmit the unofficial results to each candidate.

(b)  Following certification by the Secretary of State, the Election Coordinator shall notify the candidates, Board members, staff and other interested parties of the certified results. The certified results shall also be publicized to agencies and members in a manner prescribed by the Board. Notification to the newly elected Board member shall include an Oath of Office form. This form is to be signed by the member-elect in the presence of a notary public and returned to CalPERS. The Election Coordinator shall file the Oath with the Secretary of State.

(c)  Upon the Secretary of State certification and proper execution of the Oath of Office form, the Board member elected through this process shall take his or her office on the day provided for by statute, or if not specified by statute, the day specified in the published election schedule or immediately, if elected to fill a vacancy.