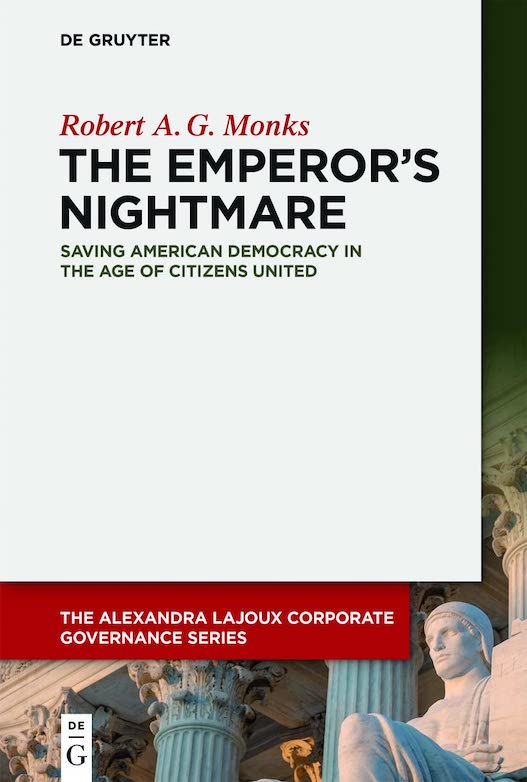 Saving American Democracy in the Age of Citizens United, that’s the subtitle of a new book by Robert A.G. Monks entitled The Emperor’s Nightmare. The subtitle speaks to the book’s forward thrust. The title puts that in the context of a long journey in corporate governance by Monks.

The cover of Power and Accountability in 1991 announced that corporations are “not accountable to anyone.” Monks and Nell Minow tried to address that by founding Institutional Shareholder Services, among other activities.

The Emperor’s Nightingale (1998) outlined alienation from the natural order, redressed by responsible institutional owners like public pensions and university endowments.  Citizens DisUnited (2013) documented America’s democracy going down a rabbit hole dug by corporate lobbyists and judges. An early quote from classics scholar Edith Hamilton, gave a hint of what was to come:

When the freedom they wished for most was freedom from responsibility, then Athens ceased to be free and was never free again.

Citizens DisUnited asserted that we, the owners of America’s corporations, have abdicated our responsibility. Just like most banks no longer hold actual mortgages like the Building and Loan in Its a Wonderful Life, we have sliced and diced our stock holdings to the point where it is not worth monitoring the companies we own through mutual funds or more directly. The Emperor’s Nightmare: Saving American Democracy in the Age of Citizens United clearly rejects a prior refrain by Monks common in his writing: “No new laws need be passed, no new regulations promulgated, no new agencies formed.” (The New Global Investors: How Shareowners Can Unlock Sustainable Prosperity Worldwide, 2001)

As a liberal Republican, he would have loved to see our problems solved by the marketplace, without government intervention. He assumed “the rapacious greed of the man-made entity known as a corporation could be brought to heal by involved, well-meaning shareholders, and that the vast corporate might in America could be turned to something more collectively meaningful than the self-enrichment of CEOs.” How did Robert Augustus Gardner Monks, born a New England patrician, become A Traitor to His Class?

Milton Friedman famously said that businesses could legitimately focus on profits as long as they played by the rules without deception or fraud. Bob Monks’ Nightmare points out Friedman’s guardrails failed to account for externalizing costs. Additionally, corporations have been using revolving doors and political payments to change the rules. It is easy to live by the rules if you set them. Florida Gov. Ron DeSantis now prohibits fund managers from considering environmental, social, and governance issues if they might sacrifice short-term financial returns. Texas bans investments in funds that vote in favor of proposals to address climate change.  Insurance companies are denying claims from fossil fuel companies being sued for climate change. They refuse to pay for intentional pollution and deception. Profits take priority for oil, investments, and insurance companies.  Taxpayers, social cohesion, and a salubrious environment are lower priorities and suffer the consequences.

Saving American Democracy: How We Go Into This Mess

In Nightmare, Bob identifies the real traitors, such as Lewis Powell, the Koch brothers, and other “conservative” activists. Lewis Powell wrote a memo for the US Chamber of Commerce in 1971 about capitalism under attack. In First National Bank v. Bellotti he conjured up the concept of “corporate speech and their First Amendments rights to make political donations to ballot-initiative campaigns, paving the way for Citizens United.”

Monks discusses how corporations off-loaded responsibilities onto taxpayers, society, and the environment. Prosecutions of white-collar crime plummeted from 17.6% of federal cases to 9.4% in 2012. Between 2009 and 2020 12 mega-donors contributed $3.4 billion to political campaigns. He provides insights into Koch Industries and their sponsorship of the American Legislative Council (ALEC), the State Policy Network (SPN), climate denial, as well as the promise of ESG and gathering more data than ever to assess risk and protect long-term value.

While his wrath and facts are primarily aimed at conservative Republicans, Monks does not leave Democrats off the hook. The Clinton Administration stripped away the protections of Glass-Steagall. Years after the financial crisis, at a conference hosted by Monks and Value Edge Advisors, I confirmed with Clinton that he had no regrets. Clinton’s union-bashing and dismantling of anti-trust protections were aided by institutions like the left-leaning Economic Policy Institute, founded by Lester Thurow, Robert Reich, Robert Kuttner, and others.

Saving American Democracy in the Age of Citizens United contains a lot of what I would consider inside baseball. Monks has access to just about everyone you might suspect as important in driving corporations and the US political system. I’ve seen presidents. I’ve even met a couple but have never had any to my home. Monks is no Woody Allen-type Zelig, who just bumbles into a variety of historical moments. As Dr. Murninghan notes in her advance praise, Monks is a “prophet and prince in service to the cause of America.” He does not need to be invited. He is part of the inner circle of those founding, owning, and managing corporations, as well as influencing politics.

As Paula Gordon notes, Mr. Monks “eviscerates today’s raging Corpocracy” with “a page-turning style rivaling fiction.” He tells us how we got here in a very brief number of pages. Where is here? “As long as the wealthy can spend unlimited amounts, democracy will continue to be under attack.”

Role reversal. When I first came across Bob’s work, I was working with California’s Department of Toxic Substances Control. I had written and gotten legislation passed to address neurotoxins that were killing people in the mid-1980s. Doctors did not know how to treat people who seemed to be hyper-sensitive to chemicals, other than to isolate them. Unfortunately, the governor vetoed our bill at the request of the CMA, now the California Manufacturers & Technology Association.

I saw regulating companies as a big part of the solution, so I helped lead our department. Over time, I learned our legal authority did not extend to regulating toxic substances, like those found in common fragrances. We could only regulate hazardous waste – chemicals that were thrown away, and households are exempt. Bob Monks seemed to believe enlightened shareholders were a higher priority, so created profit-making businesses to advise them: Institutional Shareholder Services, LENS investment fund, LENS Governance Advisors, The Corporate Library, etc. We both agreed on the importance of public funds like CalPERS and each did what we could to influence them.

As a legislative advocate, I gained experience writing legislation on behalf of representatives willing to be authors. It was frequently done at the state capitol with a dozen lobbyists from various industry stakeholders. Sometimes a public interest lobbyist would also participate but they tended to be younger, knew a lot less, and had very little time because their work was spread so thin. The industry lobbyists would intentionally write legislation to be as complex as possible so that companies would need to hire them to interpret the law, not only prior to but also after enactment.

Trade associations generally did the dirty work. Chevron, for example, might take a neutral position on legislation aimed at environmental protection, while Western States Petroleum Association would paper the entire capitol with opposition. As I grew disillusioned with the ability of laws and governments to regulate companies, I bought enough shares in hundreds of companies to file shareholder proposals. Some of them ask companies to disclose how much they spend on lobbying, including funding to trade associations.

Bob’s route took him from advocating that no new laws are needed to now advancing the idea that only a Constitutional amendment will do.

If the Voting Rights Act can be hobbled by the Supreme Court, there is no doubt that federal laws restricting the rights of corporations to plow money into the political system will be targeted and, inevitably, eroded. A constitutional imperative is the only way to ensure corporate money doesn’t continue to overun the American political system.

He goes on to endorse the work and wording of American Promise. Their draft language follows:

Section 1.  We the People have compelling sovereign interests in representative self-government, federalism, the integrity of the electoral process, and the political equality of natural persons.

Section 2.  Nothing in this Constitution shall be construed to forbid Congress or the States, within their respective jurisdictions, from reasonably regulating and limiting contributions and spending in campaigns, elections, or ballot measures.

Section 3.  Congress and the States shall have the power to implement and enforce this article by appropriate legislation and may distinguish between natural persons and artificial entities, including by prohibiting artificial entities from raising and spending money in campaigns, elections, or ballot measures.

As we have aged, I have moved more to where Bob was 20 years ago, while he has done the reverse. However, like me, I am sure he believes there is no yellow brick road or a Wizard of Oz.

Neither of us has given up on other strategies. It will take millions of Americans, and others from around the world to ensure corporations, one of human kinds greatest innovations, will serve us well. The most overt plea in the book for action is to join American Promise and work toward their recommended constitutional amendment. However, take a look at the book’s extensive appendices. Two are letters to the Employee Benefits Security Administration of the Department of Labor. Another is to the Securities and Exchange Commission. The letters reflect Monks’ traditional concerns that fund trustees be able to take all available information into account in stock transactions, engagement, and proxy voting. More ESG disclosures are needed. “GAAP is focused on what values are today. ESG is about evaluating the risks of tomorrow and five and ten years from now.”

The following is a paragraph from one of those letters that summarize the corruption that concerns Bob Monks and Nell Minow when discussing a comment letter to the same agency from the Western Energy Alliance:

Here is the real issue: “We have observed how ESG advocacy has negatively affected the industry’s access to capital over the last few years.” What the industry is saying here is that they want pension funds to subsidize otherwise market-unworthy investments. If ERISA directed plan fiduciaries to act for the exclusive benefit of corporate insiders, that might be worth considering. But ERISA’s duty is to protect pension beneficiaries, and that is the opposite of what the Western Energy Alliance and the other critics of ESG are asking for.

Recently, AIG refused to insure oil companies against a lawsuit brought in Hawaii over climate change. Honolulu’s case alleges that oil firms “engaged in a coordinated, multifront effort” to deny the threat posed by global heating, to discredit the science of the climate crisis, and to deceive the public “about the reality and consequences of the impacts of their fossil fuel pollution.” Liability insurer AIG refusal to provide coverage to fossil fuel companies being sued for climate damages is based on their actions being “intentional pollution.” (US fossil fuel firm sues insurer for refusing to cover climate lawsuit)

Funding by corporations and their trade associations to politicians essentially espousing the bizarro interpretation that fiduciary duty is owed to corporate insiders, rather than plan beneficiaries, threatens capitalism, democracy, and the earth’s salubrious environment. That’s the high stakes of The Emperor’s Nightmare. Saving American Democracy in the Age of Citizens United requires bold solutions and actions. Monks’ reflections and advice are inspiring.

Corpocracy and How to Get Our Democracy Back