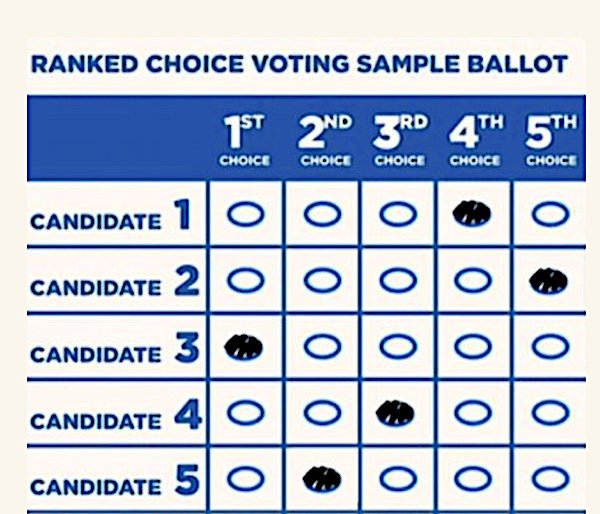 RCV in Corporate Elections? Recent action by the Tesla Board makes me believe I may live to see the adoption of ranked-choice voting (RCV) in the election of corporate directors. Tesla may have ticked off shareholders enough that the Board nominees could face multiple challengers. Do we really want to take a chance on directors being elected with 35% or less of the vote?

Like 92% in the S&P 500, Tesla adopted a majority vote standard to elect directors. They did so the year after my proposal to reduce supermajority requirements won 42% of the vote in 2014.

However, when board elections are contested, Tesla (and most other companies) uses a plurality vote standard. If three candidates run for the same position, one could be elected with only 33.3+% percent of the vote. What if that was a board-nominated candidate facing two candidates nominated by shareholders? Perhaps 66+% of Tesla shareholders would have demonstrated displeasure with the Board’s candidate(s). Using RCV might result in the election of a candidate more aligned with shareholder concerns since the second choice of shareholders could easily be the other dissident candidate.

Tesla’s change of dates for submitting shareholder proposals and for holding its 2023 got little attention in the press, other than a Bloomberg article: Life After Elon Musk: Tesla’s Board Takes Heat Over CEO Succession Planning.

Here’s something I gave to the press about that change:

James McRitchie, of Elk Grove, California, owns a Tesla (Model S) and has been a Tesla shareholder since 2012. He has filed seven seven proposals at the company over the years, including a 2021 proposal to declassify Tesla’s board that won 54.7% of the vote and a 2022 proposal to adopt a simple majority vote standard that won 56%. (Tesla requires a vote of 66.67% or higher to amend their bylaws.)

He was planning to file this year requesting disclosure of political disclosure policies and expenditures. Tesla places in the bottom tier of the CPA-Zicklin Index.

But this year, McRitchie–like so many other shareholders–missed the filing deadline. McRitchie says the notification was identified as “Other Information” under another topic heading of “Other Information” at the very end of a 10-Q disclosure primarily reporting quarterly financials. “How much more buried can you get?” A service provider of his that updates him on filing deadlines also failed to notice the change.

Tesla changed the deadline for shareholder proposals and its upcoming AGM in a way that was legal but reflected poor governance practices. Under the securities regulations, a company has a number of options for announcing changes like this.  Filing a Form 8-K is one of them.  Including it in the next required Form 10-K or Form 10-Q filing are other options, in which case the “Other Information” section is where it would go.  So what Tesla did here is compliant.  However, companies that care about having a reputation for transparency will file a stand-alone 8-K and also issue a press release for good measure, even if technically they are allowed to bury it in the 10-K or 10-Q.  For something as important as the annual meeting date and shareholder proposal filing deadline, most companies would do a stand-alone filing and press release.

Although press coverage was pretty minimal, the change placed those who had planned to file shareholder proposals on high alert. Many other Tesla shareholders are unhappy for different reasons. Maybe it is time to collaborate with current and former fans of Elon Musk.

Tesla’s current situation leads me to believe shareholders are ready to revolt. Depending on the tactics and outcomes, RCV in corporate elections may soon come under real consideration. Some factors to consider:

Of course, having many shareholders upset does not mean we will see multiple challengers or even one challenger to the directors up for nomination: Hiromichi Mizuno, Robyn Denholm, and Elon Musk. I have about 200 companies in my portfolio. At a bunch of them, shareholders could reach the required 67% solicitation of shares required for UPC by contacting 100 or fewer institutional investors. A few others would also be easy because founders hold most of the votes. (Of course, such campaigns at dual-class companies would mainly be for publicity since founders are unlikely to embrace their usurpers.)

However, Tesla has about 2,700 institutional investors, and they hold only about 38% of the shares. So even if Elon Musk still holds close to 20%, a UPC campaign might require soliciting thousands and thousands of retail shareholders. That could get quite expensive, even if challengers rely heavily on the internet and social media.

Of course, the filing timeframe is also short, and challengers should hold at least a few shares through direct registration. All mine are in a brokerage account or are held indirectly through mutual and ETF funds.
My point is not that we are likely to see multiple candidates challenging board nominees at Tesla this year. That probably won’t happen. However, the situation at Tesla alerts shareholders to future possibilities.

RCV in Corporate Elections: CalPERS and Other Sidenotes

Why am I thinking about RCV in corporate elections? It is probably because I am on already on alert to the possibility of RCV in board elections. RCV in CalPERS elections could save about $1M per cycle currently spent on run-offs. At CalPERS, I touted that RCV would foster less acrimony among board candidates, encourage more qualified candidates to run, encourage more voting, and could set an example for corporate boards facing universal ballots. See CalPERS Should Adopt IRV for Board Elections.

Donald Trump can run for president even if he is charged and convicted of a crime.1 2 3 According to the US Constitution, a criminal indictment or conviction does not prevent someone from running for president.1 Furthermore, even if Trump is convicted and still unsentenced, he can still be inaugurated and assume control of the Oval Office.4
This answer was generated by neevaAI using the following websites:

3 Can Trump Run for President From Prison?
4 Opinion | This Is What’s Going to Happen If Candidate Trump Gets Indicted


Winners in plurality contests are more likely to be from the fringe than winners under RCV. Sure, fringe candidates can be creative, exciting, and fun. But they can also be dangerous. RCV encourages dialogue and genuine discussion instead of sniping because candidates do not want to alienate voters who favor another candidate. Under RCV, it is often better to be everyone’s second choice than to have deep support among a hardcore minority.

The problems we face are enormous. We need both our political and board representatives to talk to each other and with citizens, shareholders, and stakeholders. The climate crisis is real; so are the crises of mass extinction, wealth inequality, rising authoritarianism at the expense of democracy, and so many more. RCV would not ensure we elect the representatives we want. However, it does guard against the phenomenon of thinking we can solve our problems by choosing a few saviors.

In one of the many graduate schools I attended, our class in group dynamics took the NASA Exercise: Survival on the Moon. Our variant involved everyone taking the test of our knowledge, coming together to argue out what the correct answers were, and then voting on each item. The lesson was that the group almost always performed better than any one individual. In our case, the group vote beat everyone’s answers except mine. I felt a little smug about that but later realized only my lack of persuasive abilities led to that result. There are different kinds of smarts.

Both Elon Musk and Donald Trump are smart but not on every subject. RCV in corporate elections and in civic elections is likely to lead to better outcomes in most cases. At least it creates a dynamic that encourages mutual respect and better communication. Both are sorely needed in today’s world.

CalPERS Should Adopt IRV for Board Elections