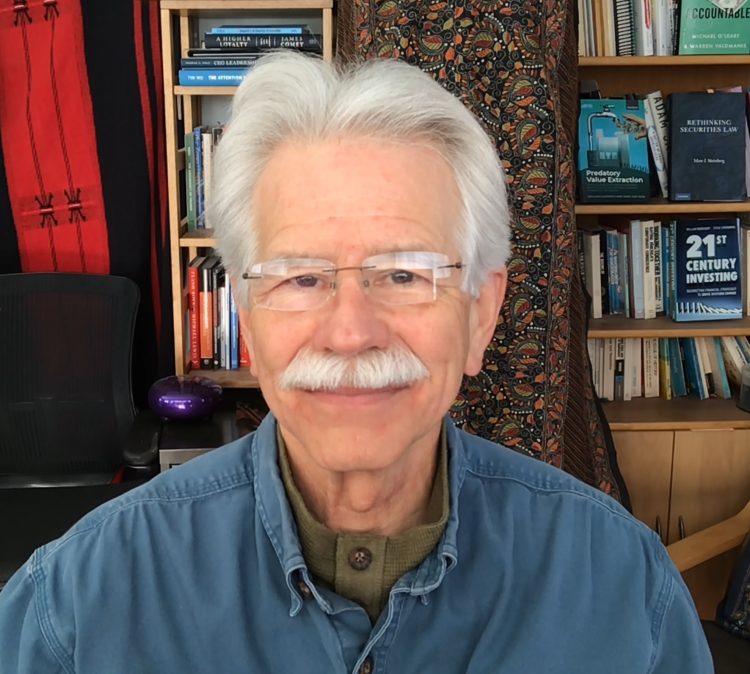 Newsflash: I considered running for the CalPERS Board seat elected by retirees. See video recorded on March 8, 2022. However, I decided to continue in my role as an individual investor advocate, with a slightly increased focus on my retirement system, CalPERS. I hope to work to assist current and future Board members on issues such as those discussed below. I endorsed Randy Cheek. Advice for Public Fund Fiduciaries (pdf).

Our healthcare benefits and services should be second to none. We should use our investments to create a better world while earning returns that ensure our monthly checks and continued public support. We should govern CalPERS transparently, and our voices should ring in Directors’ ears every minute. Here are a few ideas I’d like to work on:

I wrote a master’s thesis on worker-elected managerial assignments in California’s civil service, interned with AFSCME, advised Rath Pack when the UFCW converted it to employee ownership, went through SEIU’s capital stewardship program, testified before Adam Schiff about corruption at CalPERS, defended shareholder proposals in federal appeals court (without legal counsel), am currently suing the SEC to overturn Trump-era rules, and host a free weekly discussion forum on corporate accountability with leading theorists and practitioners over Zoom. Unfortunately, I don’t have the temperament or patience to attend countless hours of meetings with the Board and constituents. Instead, I’ve decided I am more suited to advise Board, staff and constituents and hope to be able to do so more effectively in the future.

I started State services under Governor Reagan and spent my first ten years working on healthcare, primarily Medi-Cal. We had cost-plus contracts with Blue Cross and Blue Shield. Whenever we cut costs, California saved money. I saved millions in administrative costs with management audits of each step in the process. Later, I used computer programs and statistical analysis to find fraudulent service providers. I also wrote a study for the State Controller, who sat on the CalPERS Board, that led to PERSCare and PERSChoice.

I earned a master’s in public administration at Cal State, Sacramento, an award for my thesis on worker’s self-management, and a fellowship with the National Institute of Mental Health to research workplace structures that fostered mental health and productivity. I earned an MS in social economy from Boston College, volunteered with AFSCME in Boston, then with the UFCW when workers bought out Rath Pack in Iowa.

After returning to California, I ran the Cooperative Development Program (CDP), where I gained experience lobbying the legislature and building grassroots support to save the program. I also wrote and passed legislation with bipartisan support to address autoimmune illnesses caused by exposure to toxic chemicals. Unfortunately, the governor eliminated CDP’s budget and vetoed the bill that would have addressed autoimmune illnesses.

I then headed legislation, regulations, and other functions (such as Ethics Officer) at the Department of Toxics Substances Control, working 100’s of bills and coordinating with stakeholders from communities to the governor. Although I spent much of my career at the Career Executive Assignment (CEA) level, I found we could never regulate toxic substances in products, only wastes. So, I retired early, deciding to influence companies as a shareholder instead.

As a shareholder advocate, I filed hundreds of proposals to companies voted at annual shareholder meetings. I’m a member of the Interfaith Center for Corporate Responsibility, which has been doing this work for 50 years. Most famously, they helped end apartheid in South Africa. I also work with As You Sow, the Center for Political Accountability, The Shareholder Commons, and others.

As I write this, we just reached an agreement with Pepsi to substantially reduce single-use disposable packages for their products. An earlier deal by As You Sow was with a cereal company. By 2025 the company will stop using grains for their cereal sprayed with glyphosate (a carcinogen) before harvest. Most people know glyphosate kills weeds, but it is also used as a desiccant to dry out grain used to make bread and cereals. So, many people who think they have a problem with gluten are having trouble with glyphosate.

CalPERS is one of the largest shareholders in the world. I have twenty-five years of experience on shareholder issues, including testifying before and getting rules passed by the SEC, representing myself in federal court, including federal appeals court, and suing the SEC to overturn Trump-era rules.

I have worked with CalPERS boards over the years cooperatively whenever possible. For example, I initiated candidate forums. CalPERS refused the use of their auditorium, so I rented a hall the first year and used the CalSTRS auditorium the second. CalPERS finally agreed. We now have candidate forums facilitated by the League of Women Voters. I also won rule changes requiring board members to be elected by a majority vote.

However, I have also taken more aggressive action. I overturned two regulations CalPERS adopted illegally (one on gifts, another on elections). When Congressman Schiff was a State Senator, I testified before his committee on corruption at CalPERS and the need for certain confidential documents to be released to the public after time sensitivities lapsed so officials could be accountable. Senator Schiff’s hearings accelerated investigations and eventual prosecution of CalPERS officials.

When I started working for the State, I joined CSEA and was the first delegate to bring a computer and printer to General Council, writing emergency resolutions from the floor. In addition, I was a steward, newsletter/website editor, headed CSEA’s bylaws committee, and currently serve on CSR’s Investment Committee. I have been a member of RPEA for decades. I also served on boards at Universal Cooperatives, Sacramento Natural Foods Cooperative, Church Co-op Credit Union (instituted lower loans rates for fuel-efficient autos), and am currently a Board Advisor for SoCal Adaptive Sports.

One of my many fun activities is holding free Zoom discussions with thought leaders on corporate accountability. After the forums, we load recordings to YouTube and podcasts. For example, see our recent conversation with Brandon Rees, the head of investing at AFL-CIO, Meredith Miller (co-founder of the Human Capital Management Coalition), Leo Strine, former Chief Justice of Delaware Supreme Court, and Jackie Cook of Morningstar. See CorpEngage.net. I also practice tai chi and will soon be training and playing with a puppy.

This is a placeholder for some archived material on CalPERS. I am finally taking down my PERSwatch site and will maintain what remains of value on this site as time allows. For several years, using the internet site PERSWatch.net, James McRitchie worked together with other CalPERS members to make CalPERS responsive to its members. We worked to enact Article 16 of the Constitution, making CalPERS independent from politicians. We insisted the Board release minutes from closed-door investment sessions. How else could we hold them accountable for their votes? We exposed wasteful spending on $750 coat racks for CalPERS cubicles and the common practice of many Board members of accepting gifts of fine dining and entertainment from contractors.

We pointed out that CalPERS kept reducing the State’s contribution (8 times in 11 years) but did little to increase our benefits; in fact they were eroding. McRitchie ran for the Board several times and ran ads in Capitol Weekly reminding the Board that, according to the Constitution, their primary duty is to members, not employers. Toward the end of 1998, we finally got the Board’s attention and they addressed “equity” issues with SB 400, which raised our retirement substantially through an imperfect vehicle with plenty of flaws.

In addition, we worked to reform the election process. Beginning in 2002, CalPERS began holding a runoff vote if no candidate wins a majority. There will be no more directors elected by 5.5% of the vote. That rule was enacted because board members first voted to prohibit ballot statements that include “candidates’ opinion or positions on issues of general concern to the system’s membership.” We fought that move by contacting members, unions, and the Sacramento Bee, which ran an editorial CalPERS muzzles critics: Ballot rules protect board, keep others in the dark. Then we won real reforms. We are still working to avoid the $1 million cost of runoffs by getting CalPERS to use an instant runoff (IRV) system for elections.

McRitchie’s work in government, business, non-profits, cooperatives, and universities led him to understand that accountability isn’t something easily imposed from the outside; it must be built into the governance structures of our organizations themselves. Not only has he worked to transform the governance structures of CalPERS, but he’s also done the same with corporations. (see corpgov.net)

CalPERS has tremendous transformative potential in creating a sustainable economy by seeking triple bottom-line returns – excellent financial returns, as well as social and environmental benefits. Research demonstrates that companies with good environmental practices, diverse boards, worker ownership, employee participation in decision-making, and democratic corporate governance earn substantially better returns. CalPERS should be encouraging all of the corporations it invests in to have these characteristics and they should use an enhanced indexing strategy to invest more heavily in such companies while reducing investments in companies with poor practices.

If you have ideas on what the CalPERS Board should be doing for members and beneficiaries, please call send me an e-mail at jm@corpgov.net. If we can identify just one or two members at each department, board, office, campus, union, or association chapter interested enough in the issues to spend just a few minutes each month, we can accomplish a great deal.

CalPERS Legal Resources from PERSwatch.net  (much below needs updated)

Find Laws: statutes, regulations, or legislative bills; contact members of the California Legislature using the links below. See important legal decisions impacting CalPERS members.
Organizations who’s members are also members of CalPERS. If yours isn’t listed, please let me know. Suggest a link or correction by e-mailing me at jm@corpgov.net.

Links of Interest to CalPERS Members

Links to other sites of interest to CalPERS members follow. Suggest a link.