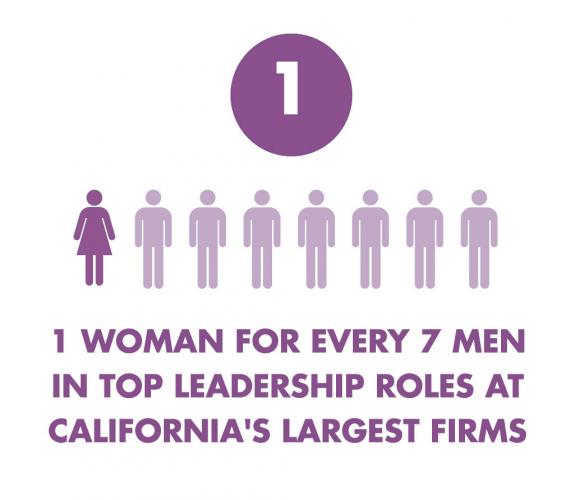 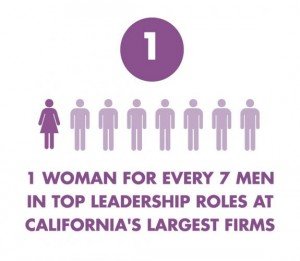 Women in California companies continue to make slight progress. More of California’s largest 400 public companies public companies than ever have women chief executive officers (CEOs), and fewer have no women in their C-suites and boardrooms. However, the annual University of California, Davis, study shows women still hold just one in eight of the senior executive and director positions in corporate California.

Overall, women hold 12.3% of the highest-paid executive positions and board seats in the state’s 400 largest public companies — a scant 0.75% point increase over last year, according to the UC Davis Study of California Women Business Leaders.

At that rate it will take fifty years for women in California companies to reach parity. I’ll be long dead. In the meantime, I’ll continue investing a disproportionate of my portfolio in companies with women at the top, betting such companies have better corporate governance and will outperform my other investments.

The UC Davis Graduate School of Management has found very incremental gains during the 11 years it has tracked the representation of women in these key decision-making roles. The percentage of women in these key corporate leadership positions has inched up from 9.6% in 2010 to 12.3% in 2015, which represents 623 women in the 5,083 highest-paid executive and board positions at the 400 firms this year.

Some strides are being made in the corner office. The number of female CEOs rose from 14 to 17, a 21% increase over last year, and a 55% increase since 2006. But these 17 female CEOs still represent only 4.3% of the 400 CEO positions. Companies with women at the helm have, on average, 38% more female leaders
than companies with a male CEO. 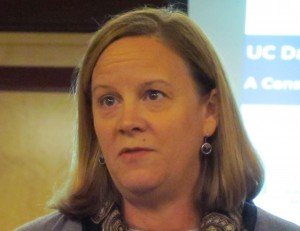 We know that a more representative, diverse group of leaders can change decision making and outcomes in companies. California has been a leader in many areas, and these results point out the opportunity for
California to take the lead in increasing women’s presence in corporate leadership.

Only two companies — upscale kitchen and cookware retailer Williams-Sonoma of San Francisco and real estate trust LTC Properties of Westlake Village — have equal numbers of women and men in top
executive positions and board seats. Only one company has appeared in the study’s top 25 list for 10 consecutive years: AMN Healthcare Services Inc. of San Diego.

At the bottom are 92 companies with no women among the highest-paid executives or board directors. These include brand names such as digital television pioneer TiVo Inc. in San Jose; Skechers U.S.A. Inc., a $2 billion global footwear maker headquartered in Manhattan Beach; and Palo Alto Networks, a leading international network security firm in San Jose that counts half of the Fortune Global 2000 companies as clients.

The study is the only one of its kind to focus on gender diversity in the boardrooms and executive suites of corporate California.

In September 2013, the California Legislature passed the first resolution in the United States calling for more women on corporate boards. The UC Davis study shows that only 17.5%, or 70 of the 400 largest public companies in California, have met the resolution’s nonbinding standards.

Among the findings in this year’s UC Davis study:

The study tracks the members of the boards of directors and the five highest-paid executives for each company as reported to the SEC using data available as of Aug. 31, 2015. The 400 companies were selected based on highest market capitalization.

To publish the study, UC Davis partners with Watermark, a Bay Area-based nonprofit that is focused on increasing the representation of women in leadership roles. Said Watermark CEO Marlene
Williamson,

We’re pleased to see some movement forward but we want to see much more movement and at a much faster pace.  This study is important in terms of tracking our success and determining what more we have to do to achieve gender equity in the top spots in corporate California. And from this study, we’ve created the Watermark Index, which looks specifically at how well Bay Area companies are doing in this regard. The UC Davis study, and now our Watermark Index, will continue to serve as important benchmarks as we go forward. 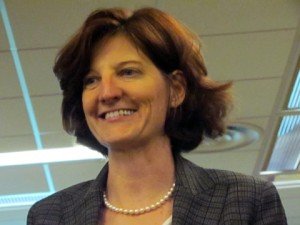 Many thanks to study author Amanda Kimball who has worked in this important report annually for many years.

Just out of curiosity I looked up the ISS rating for the top five companies this year and compared them with the first five in the report’s alphabetical list of California companies with no women directors. Lower scores are better. Results below:

Five Companies with Highest Percent of Women at Top

Five with No Women Directors

ISS rates companies on Audit, Board, Shareholder Rights and Compensation to arrive at their QuickScore. This was just a small sample but I think it is highly likely that companies with more women at the top are more likely to be scored better on average than those with few or no women at the top.