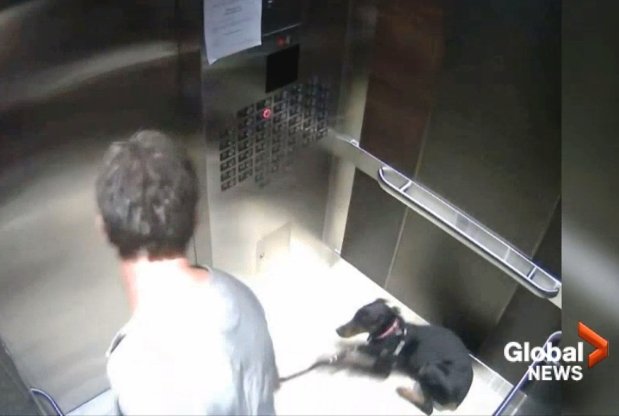 Des Hague and puppy Sade about to be kicked

Sports catering giant Centerplate fined and censured CEO Des Hague last week after an internal review of surveillance video showing him kicking and yanking his friend’s puppy by its leash in a Vancouver elevator.(ESPN) Should the board fire him? Maybe we need more videos of CEOs and board discussing global climate change, slave labor and disdain for their employees and customers. Or is it only kicking puppies that brings outrage?

When two B.C. SPCA officers entered the 39th-floor condo of a downtown Vancouver building Wednesday night they found a Doberman pinscher puppy in its crate, surrounded by the stench of its own urine with its food and water bowls out of reach, according to court documents.

Once let out of her cage, Sade — the one-year-old female puppy — was skittish around people and the Society for the Prevention of Cruelty to Animals officers said she appeared physically abused, according to the information to obtain a search warrant filed in B.C. Provincial Court and obtained by The Sun.

A day earlier, a concerned citizen had called the SPCA’s cruelty hotline and sent video footage of Sade and a man in the elevator at the Private Residences at the Hotel Georgia, according to the search warrant documents.

That video — dated July 27 — showed the man kicking the dog in the stomach repeatedly and yanking her “leash aggressively over his right shoulder to the point where (the) dog is lifted into the air chocking (sic) the dog,” according to the search warrant documents. Members of the public were outraged Thursday night after Global News obtained the video and led its main newscast with the footage. (Suspect in Vancouver dog abuse case: ‘I am ashamed and deeply embarrassed’)

I take full responsibility for my actions. This incident is completely and utterly out of character and I am ashamed and deeply embarrassed. Under the circumstances of the evening in question, a minor frustration with a friend’s pet caused me to lose control of my emotional response. Unfortunately, I acted inappropriately, and I am deeply sorry for that and am very grateful that no harm was caused to the animal.

I have reached out to the SPCA and have personally apologized to the dog’s owner. At this time, I would like to extend my apology to my family, company and clients, as I understand that this has also reflected negatively on them.

If he kicks a puppy out of ‘minor frustration,’ what does he do when faced with major issues at work? If you can’t trust him to take care of your dog without abusing him, can you trust him to run your company?

Centerplate’s Board of Directors recently convened a special meeting following the completion of an internal investigation and review of an incident involving animal cruelty by its CEO Des Hague.

We pride ourselves as individuals and as a company on how we treat others—both humans and animals. The company finds Mr. Hague’s personal behavior unacceptable and outside the bounds of our high standards and expectations of all of our staff. We do not condone nor can we overlook the mistreatment of animals and Mr. Hague’s personal misconduct.

Thus, upon internal review of the incident, and recognizing that Mr. Hague is truly ashamed of his actions and has expressed sincere remorse and shame for erratic behavior that is uncharacteristic of him we have decided to take the following immediate actions:

Mr. Hague will be given a written censure by the Board whereby he will be placed on indefinite probation stating that any further acts of misconduct would result in immediate termination.

As a condition of his continued employment with Centerplate, Mr. Hague will personally donate $100,000.00 USD which will be donated towards the establishment of the Sade Foundation in honor of the dog he mistreated in the elevator to help support the protection and safety of animals in the city of Vancouver where the incident occurred.

Further, we are requiring Mr. Hague to serve 1000 hours of community service in support of an organization that serves to protect the welfare and safety of animals.

Centerplate in no way condones the mistreatment of animals, and as a strong sign of our conviction, we the company will also contribute a portion of our sales to the Sade Foundation. Additionally, we will open this foundation to all Centerplate employees and the general public who want to support and contribute in the hope that meaningful change can come out of this tragic situation.

Mr. Hague still faces potential charges in Vancouver, where he is personally responsible for charges and fines in relation to the incident.

The company had previously said the incident was a personal matter. Apparently, when 135,000 people sign a petition asking for the company to fire their CEO it becomes a public matter. Centerplate has more than 30,000 employees and says it serves more than 115 million people a year at the more than 300 venues for which it caters.

I understand why 130,000 will sign a petition to fire Hague for kicking a puppy. What I don’t understand is why so few are concerned with CEOs who make large political contributions from company funds without disclosing those contributions to the shareowners of the company. Why don’t we complain when the mutual fund that invests our deferred compensation votes against requiring such disclosures, requiring more diversity on boards, providing equal employment opportunities, supplier sustainability, etc.

Kicking a puppy is equated with sociopathic behavior. What about a CEO who tells the board he must also be the board chair (his own boss) or else he will quit? Sure, fire Hague for kicking a puppy but don’t let it end there. If only kicking the cure for global warming to future generations could generate the same outrage as kicking a puppy.

5 Responses to Should CEO Des Hague be Fired for Kicking Puppy?